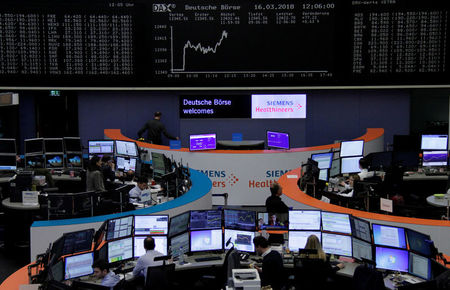 (Adds opening price, background)
LONDON, Nov 2 (Reuters) - Europe's key STOXX .STOXX
.STOXX50 indexes opened more than an hour late on Monday after
an outage due to "input data problems", the index operator
Qontigo told its clients.
The delay comes at the start of a crucial week for markets
as traders prepare for market volatility ahead of the U.S.
elections on Tuesday.
The issue did not affect trading of single stocks, although
it likely impacted derivatives or exchange traded funds whose
prices are based on the pan-European STOXX 600 levels.
"Our input data and index calculation have been affected by
input data problems," said, Qontigo, which is owned by Deutsche
Boerse DB1Gn.DE . Qontigo's spokesman did not give further
details on the reason for STOXX's failure this morning.
The STOXX 600 index opened an hour and six minutes late and
was trading 0.4% higher at 343.6 points as of 0915 GMT.
The outage follows Euronext's widespread disruption last
month affecting trading from Dublin and Amsterdam to Paris and
Lisbon. There have been a string of breakdowns this year on
international exchanges, including a hardware failure at the
Tokyo Stock Exchange, cyber attacks that hit New Zealand's stock
exchange, and a software glitch at Germany's electronic trading
platform Xetra, also managed by Deutsche Boerse.