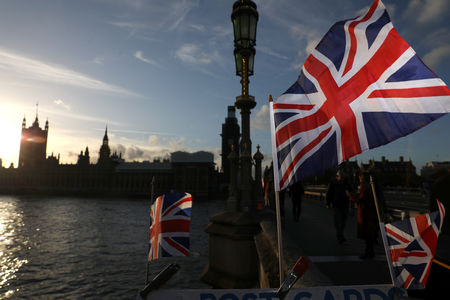 By Tommy Wilkes
LONDON, Dec 24 (Reuters) - Stocks rallied and the British
pound gained on Thursday as Britain and the European Union
closed in on a free-trade deal and investors wagered on a global
economic recovery.
Britain and the European Union were hammering out the final
details of a narrow trade deal on Thursday with an announcement
expected imminently, adding to an optimistic mood in the final
trading session before the Christmas break.
While a last-minute deal has long been expected, finally
removing the possibility of a no-deal outcome 4-1/2 years after
Britain voted to leave the trading bloc will come as a relief to
markets. The FTSE 100 .FTSE rose 0.07% while the more
domestically-focused British mid-cap FTSE 250 index .FTMC hit
its highest levels since February, and UK small caps a record
high .FTSC . The STOXX 50 STOXX50E added 0.17% while
Germany's DAX .GDAXI gained 1.26%.

The MSCI world equity index .MIWD00000PUS , which tracks
shares in 49 countries, rose 0.16% after solid gains in Asia.
The Brexit deal adds to an end-of-year bullish mood in
markets, where investors have looked beyond a spike in new
COVID-19 cases globally and rising unemployment to the hope that
vaccines and more fiscal spending will help spur an economic
recovery in 2021.
High on record sums of central bank stimulus, investors have
pushed stock markets to new peaks.
Mizuho analysts dubbed it the "mistletoe effect", whereby
anticipation of a trade accord meant that "despite being subject
to the approval of PM Johnson and EU governments the outline
deal was enough" to stoke a rally in markets.
Sterling added another 0.6% to $1.3586 GBP=D3 , close to
its highest level in two years. Still, the pound's 5% rally
since early November means much of the Brexit relief has been
priced in to the currency, analysts say.
The dollar edged 0.1% lower =USD while the euro held above
$1.22 EUR=EBS .
Wall Street ended mostly higher on Wednesday and futures
pointed to a stronger open Esc1 later on Thursday.
A raft of mixed U.S. economic data showed lower jobless
claims and an uptick in new orders for durable goods, but also a
pullback in consumer spending, falling personal income and
fading sentiment as the holiday shopping season nears its end
amid a resurgent pandemic. Investors largely shrugged off comments by U.S. President
Donald Trump that a nearly $900 billion stimulus bill, agreed
upon after months of wrangling in Congress, was "a disgrace"
that he might not sign. "While the pandemic meant lost lives and lost jobs in 2020,
a successful vaccine rollout during 2021 is set to be a game
changer: governments will gradually lift mobility restrictions
and societies will return to most pre-pandemic habits," Candriam
told clients.
"The swift recovery during the third quarter in the Western
hemisphere and the ongoing expansion in Asia, where a second
infection wave has mostly been avoided, serve as a template for
the near future."
Brent crude futures LCOc1 rose 37 cents to $51.57 a
barrel, while U.S. West Texas Intermediate crude CLc1
increased 34 cents to $48.46, buoyed by a drawdown in U.S.
stockpiles and the potential Brexit trade deal. O/R
Gold prices rose, with the spot price of the precious metal
at $1,878, 0.3% higher on the day.