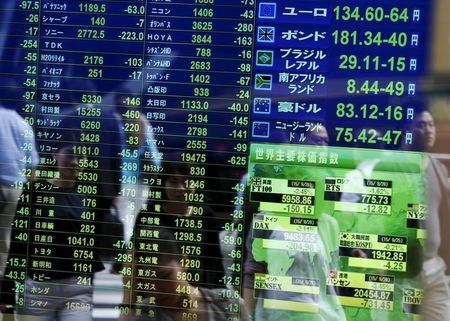 By Stanley White and Sumeet Chatterjee
TOKYO/HONG KONG, June 16 (Reuters) - Asian shares rallied
and the dollar fell on Tuesday as risk appetite was bolstered by
the formal start of the Federal Reserve's corporate bond buying
programme, and earlier worries about a second wave of
coronavirus infections eased.
Improving sentiment also pushed up Wall Street futures with
e-Minis for the S&P 500 ESc1 rising 1.6% following a late U.S.
stocks rally on Monday. Treasury yields rose and the yield curve
steepened.
The Fed said it will start purchasing corporate bonds on
Tuesday in the secondary market, one of several emergency
facilities launched in the wake of the coronavirus pandemic.
A flood of liquidity in the form of fiscal and economic
stimulus, along with uneven but steady re-openings of state and
local economies, sparked a sharp rally in the stock market since
its late-March trough.
"Equities were overbought and corrected lower, but the S&P
500 has bounced off support because of the Fed," said Shane
Oliver, head of investment strategy and chief economist at AMP
Capital Investors in Sydney.
"The markets will continue to go higher as long as economies
continue to reopen and as long as the number of coronavirus
cases is not large enough to stop the reopening."
The investor sentiment was also boosted by a Bloomberg News
report that the Trump administration is preparing a nearly $1
trillion infrastructure proposal as part of its push to spur the
world's largest economy back to life. MSCI's broadest index of Asia-Pacific shares outside Japan
.MIAPJ0000PUS rose 3.2%, its biggest one-day gain since March
25. Australian stocks .AXJO rose 4.4%, while shares in China
.CSI300 rose 1.2%.
European markets were also set for a strong opening with
pan-region EuroSTOXX 50 futures STXEc1 rising nearly 3.0%,
German DAX futures FDXc1 gaining 3.1% and FTSE futures FFIc1
trading up 2.6% by 0534 GMT.
Sentiment in Asia was also helped by data showing there were
27 new coronavirus cases in Beijing, down from 36 new cases the
previous day. Beijing banned high-risk people from leaving the
capital to stop the spread of a fresh outbreak. Japan's Nikkei stock index .N225 closed up 4.9%, its
biggest daily gain since March 25, while shares in South Korea
.KS11 were up 4.8%.
But some analysts were not convinced about the strength of
the gaining momentum.
"With pricing across the risk spectrum now rich, we expect
further gains to be more selective, differentiated and
volatile...on fears of a COVID-19 second wave and concerns about
their extended valuations," Barclays analysts wrote in a
research note on Tuesday.
Against a basket of currencies the dollar =USD eased 0.1%
to 96.44, almost 1% below Monday's high of 97.396. The
risk-sensitive Australian dollar AUD=D3 sits more than 2%
above a two-week low hit on Monday, and rose 0.6% to $0.6968 on
Tuesday.
The yen JPY=D3 was little changed at 107.33 per dollar.
The Bank of Japan kept monetary settings steady on Tuesday and
stuck to its view that the economy will gradually recover from
the coronavirus pandemic.
The Fed on Monday also announced eagerly-awaited details of
its programme to lend funds directly to companies. Benchmark 10-year Treasury yields notes US10YT=RR edged up
to 0.7363%, while the spread between two-year and 10-year yields
US2US10=TWEB widened to 54 basis points in a sign of improving
risk appetite.
Oil prices were steady on Tuesday as lingering concerns over
the threat to fuel demand from the resurgence of new coronavirus
infections around the world were cushioned by hopes for further
cuts in crude supplies. O/R
U.S. crude CLc1 was trading up 0.2% at $37.18 a barrel,
after having fallen 1.2% earlier, while Brent crude LCOc1 also
rose 0.2% to $39.78 per barrel.