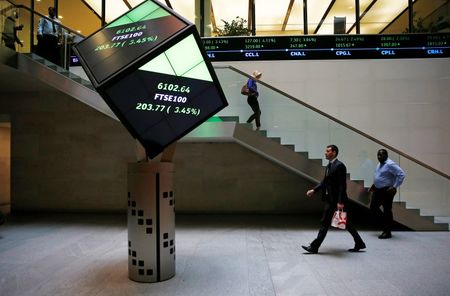 By Stanley White and Jessica DiNapoli
TOKYO/NEW YORK, Dec 2 (Reuters) - Asian shares rose on
Wednesday after a strong lead from Wall Street fuelled by hopes
for additional U.S. economic stimulus and a coronavirus vaccine,
but trade was choppy as some investors booked profits.
Top U.S. Senate Republican Mitch McConnell said on Tuesday
that Congress should include new coronavirus stimulus in a $1.4
trillion spending bill aimed at heading off a government
shutdown in the midst of the pandemic. U.S. President-elect Joe Biden told the New York Times his
priority is getting a generous aid package through Congress even
before he takes office in January. Top U.S. health officials, meanwhile, announced plans to
begin vaccinating Americans against the coronavirus as early as
mid-December once regulatory approvals are in place, as
nationwide deaths hit the highest number for a single day in six
months. MSCI's broadest index of Asia-Pacific shares outside Japan
.MIAPJ0000PUS rose 0.27%, but was still trading below last
week's all-time high. Australian stocks .AXJO rose 0.12%.
Shares in China .CSI300 recovered from early losses and
rose 0.12%.
Tokyo stocks .N225 were little changed after setting a new
29-year high. Softbank Group shares 9984.T fell 0.66% after
Bloomberg News said the tech investor is winding down its
options trades on companies including Amazon.com Inc AMZN.O
and Facebook Inc FB.O .
South Korean shares .KS11 hit a record high due to signs
of an increase in semiconductor demand. U.S. stock futures EScv1 declined 0.23% following a record
closing high for Wall Street shares.
Europe also looked set for a softer open, with Euro Stoxx 50
futures STXEc1 down 0.37%, German DAX futures FDXc1 down
0.35%, and FTSE futures FFIc1 trading 0.38% lower.
Benchmark U.S. Treasury yields eased slightly but remained
near a three-week high as Republicans and Democrats submitted
proposals for economic stimulus in a bid to pass a bill some
time this month. Analysts say downside for global equities is likely limited,
with major uncertainties surrounding the outlook now fading.
"We've had some positive leads, and a combination of
optimism around the vaccine, and government and central bank
stimulus remains in place," said Michael McCarthy, chief markets
strategist at CMC Markets. "It's a sweet spot for markets."
MSCI's gauge of stocks across the globe .MIWD00000PUS rose
0.07% in Asia on Wednesday, edging toward an all-time high.
Pfizer Inc PFE.N and Germany's BioNTech SE BNTX.O sought
emergency approval of their vaccine candidate from the European
regulator on Tuesday. Competitor Moderna Inc MRNA.O also
applied for emergency approval from the European regulator on
Tuesday. Pfizer and BioNTech said their vaccine could be launched in
the European Union as early as this month, though a European
regulator clouded the schedule when it said it would complete
its review of their vaccine by Dec. 29. The U.S. 10-year Treasury yield US10YT=RR stood at 0.9129%
in Asia, not far from a three-week high of 0.9380% hit in the
previous session as investors priced in the likelihood of more
fiscal spending.
The spread between two-year and 10-year yields
US2US10=TWEB was also near its steepest in three weeks.
Higher yields did not support the dollar =USD , which was
mired near its lowest level in more than 2-1/2 years as investor
appetite for risk increased. Earlier this year Japan's Softbank Group raised eyebrows by
buying billions of dollars of call options for U.S. tech giants
while taking long positions in the underlying shares.
Some analysts say hedging by the counterparties that sold
the options to Softbank contributed to a frenzied rally in the
U.S. tech sector. "This could be big news ... and bad for the tech market,"
Andrew Brenner, New York-based head of international fixed
income at NatAlliance Securities, said in a note, adding that it
depends on how much you believe SoftBank was behind increased
option volatility.
Oil prices extended losses in Asian trading after OPEC and
its allies left markets in limbo by postponing a formal meeting
to decide whether to lift output in January.
Brent crude futures LCOc1 fell 0.74% to $47.01 per barrel,
while U.S. crude CLc1 fell 0.88% to $44.16 per barrel.
<^^^^^^^^^^^^^^^^^^^^^^^^^^^^^^^^^^^^^^^^^^^^^^^^^^^^^^^^^^^
Global assets http://tmsnrt.rs/2jvdmXl
Global currencies vs. dollar http://tmsnrt.rs/2egbfVh
Emerging markets http://tmsnrt.rs/2ihRugV
MSCI All Country Wolrd Index Market Cap http://tmsnrt.rs/2EmTD6j
^^^^^^^^^^^^^^^^^^^^^^^^^^^^^^^^^^^^^^^^^^^^^^^^^^^^^^^^^^^>