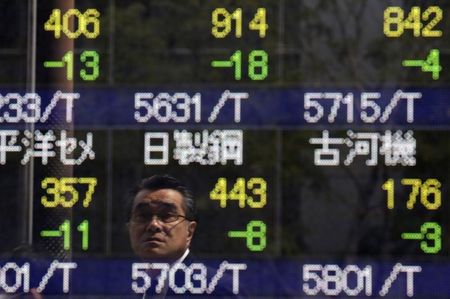 By Chibuike Oguh
NEW YORK, June 10 (Reuters) - Asian stocks were set to fall
on Thursday after gloomy economic projections from the U.S.
Federal Reserve sent the greenback and most Wall Street shares
lower.
Fed officials at their policy meeting on Wednesday said U.S.
gross domestic product is expected to decline 6.5% this year.
They also flagged the need to keep the key interest rate near
zero through at least 2022. "The Fed is basically saying they're going to keep the
system solvent and at the macro level there's no room for
failures but at the micro level there'd be some businesses that
won't survive," said Jamie Cox, Managing Partner at Harris
Financial Group.
Australian S&P/ASX 200 futures YAPcm1 were down 1.08%,
while Japan's Nikkei 225 futures NKc1 fell 1.2%. Hong Kong's
Hang Seng index futures .HSIc1 were 0.31% lower.
The S&P 500 and Dow Jones benchmarks both moved between
gains and losses after the Fed statement, which was the first
projections from the U.S. central bank on the economy since the
coronavirus outbreak.
An S&P index of bank shares .SPXBK , which tend to benefit
from rising rates, fell 5.8% in its biggest daily percentage
decline since April 15, and the S&P 500 financial index .SPSY
was the biggest drag on the benchmark index.
"The broad downgrade in banking stocks came as the market
wasn't sure what the extent of their loan loss provisions would
be," Cox said.
The Nasdaq benchmark, however, continued its record-breaking
rally for the third consecutive session helped by gains in
shares of Microsoft MSFT.O and Apple AAPL.O , with investors
viewing technology as a defensive sector with massive growth
opportunities, Cox added.
On Wall Street, the Dow Jones Industrial Average .DJI fell
1.04%, the S&P 500 .SPX lost 0.53%, while the Nasdaq Composite
.IXIC gained 0.67%.
The dollar fell to a three-month trough against the euro,
sterling and Swiss franc after the Fed's pledge to keep monetary
policy loose until the U.S. economy is back on track.
The greenback fell about 0.4% against a basket of major
currencies to 95.882 =USD after earlier sliding to 95.714, a
level not seen since mid-March.
The euro EUR= rose as high as $1.1422 and sterling GBP=
reached $1.2812, with the dollar hitting a three-month low of
0.9425 franc CHF= versus the Swiss currency.
U.S. Treasury yields fell as the Fed promised to maintain
monthly bond purchases at "the current pace" of about $80
billion in Treasuries and $40 billion in agency and
mortgage-backed securities. Benchmark 10-year Treasury yields US10YT=RR fell 9 basis
points to 0.744%. Two-year yields US2YT=RR , which are the most
sensitive to rate changes, fell 3 basis points to 0.177%.
Oil rebounded from earlier losses, even as U.S. data showed
crude inventories rose to a record high, reviving worries of a
persistent glut due to weak demand.
Crude stocks rose by 5.7 million barrels in the week to June
5 to 538.1 million barrels, according to a U.S. Energy
Information Administration report. EIA/S
Brent crude LCOc1 settled up 55 cents to $41.73 a barrel.
U.S. West Texas Intermediate (WTI) CLc1 rose 66 cents to
$39.60 after falling more than 2% in the session.