Top 5 Things to Know in the Market on Thursday, June 4th

Top 5 Things to Know in the Market on Thursday, June 4th 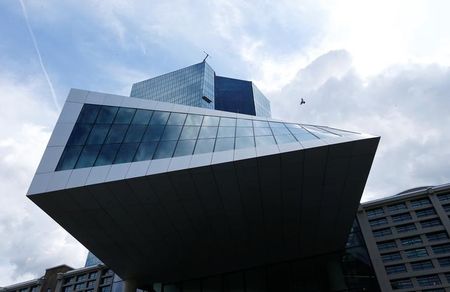 Investing.com -- The European Central Bank is expected to bolster its crisis-fighting bond purchase plan, while the U.S. gets its weekly check on the labor market with initial and continuing jobless claims (as well as April's trade balance). Stocks are pausing for breath after roaring ahead on Wednesday, but they're still mostly unfazed by the wave of protests that continued in more muted form yesterday - the fireworks came mainly from Defense Secretaries past and present distancing themselves from their commander-in-chief. Germany agreed another big economic stimulus package that put consumers ahead of car producers, and oil prices are slipping amid accusations of free-riding on the current deal on output restraint. Here's what you need to know in financial markets on Thursday, June 4th.

The U.S. gets its weekly check on the state of the labor market at 8:30 AM ET (1230 GMT), with the market looking for further evidence that the situation is improving after the pandemic-driven collapse in April. The numbers are essentially the most up-to-date data the market has on the job situation, given that both ADP’s and the Labor Department’s payrolls reports this week only cover the period through the middle of the previous month.

Analysts expect 1.8 million initial jobless claims for last week, which would be the first time it had fallen below 2 million since late March. The continuing claims number is expected to fall by 1 million to just over 20 million.

The U.S. will also publish its trade balance data for April, which will likely show continued drops in both exports and imports.

The European Central Bank is expected to increase the size of at least one of its bond-buying programs at its regular governing council meeting, providing further support to a Eurozone economy that it expects to shrink by at least 8% this year.

Analysts expect the bank to add another 500 billion euros to its 750 billion euro ($840 billion) Pandemic Emergency Purchase Program, which it has used to cap sovereign spreads and ensure overall market liquidity since March.  Some also think it possible that the ECB will expand its asset purchases to include junk-rated corporate debt, following the Federal Reserve’s step in that direction.

The decisions are due at 7:45 AM ET, with President Christine Lagarde’s press conference following at 8:30 AM.

The euro zone got an indirect boost overnight as the German government agreed a 130 billion-euro stimulus package that will include cuts on value-added tax but no wholesale car scrappage scheme. The euro edged lower to $1.12, having risen ahead of the news.

U.S. stocks are set to open lower, consolidating after a breakneck rally driven largely by the fear of missing performance benchmarks as cyclical stocks recover from the oversold levels of March.

The ongoing relief rally has brought the Nasdaq to within a couple of percentage points of its all-time highs, on perceptions that the pandemic has accelerated the economy’s structural long-term shift towards online and remote business. That didn’t stop Cloudera (NYSE:CLDR) stock from falling sharply in after-hours trade on Wednesday after its results missed elevated expectations.

Of interest after the bell will be results from retailer Gap (NYSE:GPS) and chipmaker Broadcom (NASDAQ:AVGO).

A second night of relative calm in U.S. cities was overshadowed by a public rupture between President Donald Trump and both the serving Defense Secretary and his predecessor.

Defense Secretary Mark Esper disagreed on Wednesday with Trump’s threat to invoke the 1807 Insurrection Act and send combat troops to patrol American cities, saying the National Guard was better placed to restore order on the streets.

Meanwhile, James Mattis, who served as Defense Secretary from 2017 to January 2019, wrote in The Atlantic that “We must reject and hold accountable those in office who would make a mockery of our Constitution.” He wrote that the majority of protesters were seeking Equal Justice Under Law, as provided for by the constitution, and that “we must not be distracted by a small number of lawbreakers.”

A Monmouth University poll carried by the Wall Street Journal suggested that Trump had slipped further behind his presumptive rival in November’s election, Joe Biden, in the course of the week.

Oil prices slipped as Saudi Arabia and Russia put pressure on quota-cheats to put their houses in order before committing to an extension of the current deal on output restraint.

An initiative to move up next week’s scheduled ‘OPEC+’ meeting appears to have run into the sand, given the failure of Iraq to agree to rein in its overproduction. Saudi Arabia and Russia, the two most important players in the OPEC+ bloc, have signalled they only want to extend the current deal by one month, rather than the three months that some in the market had hoped for.