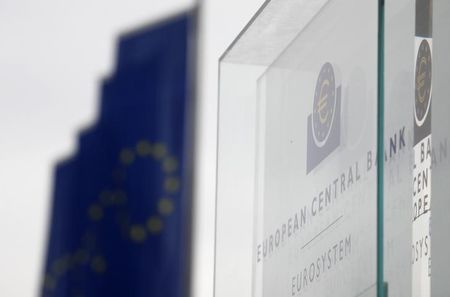 (Bloomberg) -- European Central Bank officials will confront a frustrating outlook when they hold their first policy meeting of the year on Thursday, as stricter lockdowns and a slow vaccine rollout across the region threaten to leave the economy jammed up for months on end.

A resurgent outbreak of the coronavirus and worries about new strains of the disease are testing the assumption that their latest stimulus boost will be enough to carry the euro area through a recovery. Political tensions in Italy are adding to uncertainties just as currency strength threatens to dampen a hoped-for rebound in inflation.

In the face of those risks, ECB President Christine Lagarde has struck an upbeat tone for the year, insisting only last week that the growth outlook adopted in December is still valid. With more than 1 trillion euros ($1.2 trillion) left to spend on stimulus, the institution is unlikely to rush any revamp of its ultra-loose policies, economists say.

“There’s a risk Lagarde will sound more optimistic than the market expects,” said Piet Christiansen, chief strategist at Danske Bank. “The economy is facing near-term headwinds. But there are also reasons for the ECB to be optimistic.”

The institution’s caution in overreacting to Europe’s setbacks in fighting the virus is likely to match the poise of other global central banks meeting this month as they watch vaccinations gathering pace and gauge the implications of a new U.S. presidency.

“Fortunately, as the euro area enters a third round of restrictions, financial markets already understand the European Central Bank’s reaction function and that significantly reduces the need for shock-and-awe action.”

With a new ECB response unlikely for now, its officials may well focus their discussion on longer-term strategic issues such as their inflation goal. The Governing Council has mostly kept findings from its ongoing review private so far, though it is due to present conclusions around the middle of this year.

Lagarde’s exchange with reporters might meanwhile dwell on more immediate challenges, including Italy’s teetering government and the euro’s rise close to a record on a trade-weighted basis. She has said officials must take an “extremely attentive” view on the currency’s strengthening.

The ECB predicted six weeks ago that the region would grow 3.9% in 2021 after a 7.3% slump last year. Still, the likelihood of a double-dip recession has increased since December, and numerous banks have downgraded forecasts to account for tougher restrictions imposed from Germany to Spain.

The institution’s view isn’t yet swayed much by tighter curbs. Lagarde explained last week that the December projections assumed lockdowns would last until the end of the first quarter. “What would be a concern,” she added, would be a continuation of such measures “after the end of March.”

Some colleagues on the Governing Council have adopted a more somber tone, with Irish Governor Gabriel Makhlouf warning last week that with the crisis persisting, “its economic impacts have still to fully emerge.”

Weighing on policy makers’ minds is the slow pace of vaccinations. The European Union is lagging behind major advanced-economy peers, with only 1.4 vaccines administered per 100 people, compared to 7.1 in the U.K. and 5 in the U.S.

The latest data suggest it will be a challenge for Europe to reach its recommended goal of vaccinating at least 70% of the population by the summer. That possible delay could threaten confidence in the region and raise questions over the prospects and strength of its recovery compared to other economies.

Most economists surveyed by Bloomberg still predict the ECB won’t need additional stimulus to fight the pandemic crisis. They do, however, expect its current emergency bond-buying program to be used in full, countering Lagarde’s guidance in December that the ECB might not spend it all.