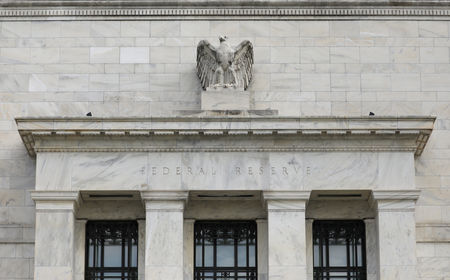 (Bloomberg) -- The bond market is sounding the alarm that the flood of cash that policy makers have unleashed to buoy growth in the face of the pandemic will have potentially painful consequences for the economy.

The Treasuries yield curve is the steepest in three years, with long-maturity rates climbing as the Federal Reserve prints billions of dollars a week to add to its stockpile of government debt and other assets. The steepening phenomenon is typically a signal of improving growth prospects, and riskier assets such as stocks are certainly rallying. Yet some investors are more wary about what it says about inflation expectations, with U.S. activity merely giving a hint of bottoming out from what’s likely the deepest slump in living memory.

The risk that the market is starting to grapple with is that in the pandemic’s wake, stagflation -- a troublesome combination of tepid growth and accelerating inflation -- takes hold in the years ahead and vexes markets as it did in the 1970s. Cash is flooding into funds that invest in inflation-protected securities, and breakeven rates, another gauge of consumer-price expectations, are ticking back higher.

Not that this is all bad, necessarily. The Fed would actually welcome a move away from the deflationary angst that took hold at the peak of the market turmoil in March, as its unprecedented monetary easing is aimed at doing just that. Yet the prospect that inflation will quicken at the same time that job creation sputters is far from ideal. With most bond investors braced for low rates for years to come, the specter of yields finally taking flight could prove perilous.

“The Covid-19 crisis will be remembered for many things, and among them will be the long-awaited return of inflation in developed markets,” said Oliver Harvey, a macro strategist at Deutsche Bank AG (NYSE:DB).

In a world of zero rates, inflation may seem like a distant threat -- and those who worry about it are a minority in the market, with inflation prognosticators having been proven wrong time and time again over the past decade. But it may be the side effect of the pandemic cure being administered by central banks and governments.

The Fed’s balance sheet alone has swelled above $7 trillion from about $4 trillion in early March, and more steps may be coming, such as yield-curve control. Expectations for such a move are contributing to the steepening push.

Corporations’ reliance on Fed support means the central bank will “have to continue providing liquidity to the system until inflation rates pick up to levels that probably would be viewed as unacceptable by most participants of the Fed today,” Minerd said on Bloomberg TV Wednesday. The long-run implication is “a period of stagflation.”

The steepening yield curve, coming as equities are surging, looms large on the radar of Kathryn Kaminski, chief research strategist and portfolio manager at AlphaSimplex Group. For her, it warns of growing concern about inflation, a topic she says she’s hearing more buzz about.

“My apocalypse scenario -- whether or not it can happen -- in terms of where we are positioned now is clearly stagflation,” she said. “That would be a reversal of all the trends we’ve been following. I don’t think it’s a short-term scenario, but that’s the scary long-term one.”

The result would be equities remaining on the front foot initially as the economy reflates, then heading lower, bond prices falling, commodities rising and dollar weakness, she said.

The last time stagflation gripped the U.S. in the late 1970s, 30-year yields eventually doubled in a matter of years, on their way to a record high above 15% in the early 1980s. The long bond yields about 1.55% now, up from a historic low of just under 0.7% reached in March.

Others are more sanguine about growth, but still see the makings of inflation as global supply chains get clogged.

Telltale signs can be seen in the latest data. Alongside the record decline in a key measure of U.S. consumer prices in April, the cost of food at home surged 2.6% from the prior month, the most since 1974, as Americans stocked up at grocery stores. In the U.K., pet food at one point jumped 26% on an annualized basis, according to Deutsche Bank (DE:DBKGn) calculations.

Fiscal and monetary policy stimulus “in and of itself has a very, very important inflationary dynamic to it,” said Jeffrey Rosenberg, a portfolio manager of BlackRock’s Systematic Multi-Strategy Fund. He sees inflation as a risk starting in about six months, and one that’s will be marked by a steepening curve.

Even as the curve steepens, market proxies for inflation projections show investors foresee U.S. consumer prices below 2% for decades, although they’re well above their March lows. Forward inflation swap rates in the U.S. and the euro-zone, favored by policy makers for long-run inflation expectations, have also rebounded yet remain below long-term averages.

“The market’s view should be intolerable at the Fed,” Cabana said. “They will have to be credible in keeping rates low to generate upside inflation risk premium. That could be highly inflationary.”

He’s advising clients to wager that the gap between five- and 30-year yields will widen as a way to hedge that risk.

Structurally, decades of globalized supply chains that stifled inflation may be at an impasse, with economists buzzing about the potential for what’s known as re-shoring and the resulting depressed global economy. For Yale University economist Stephen Roach, this backdrop combined with the growing debt pile bodes for higher inflation in the years ahead.

“When you couple the trend of offshoring to re-shoring with a likely resurgence of pent-up consumer demand if we get a vaccine, you have a lethal combination of higher costs,”’ said Roach, who famously warned about the U.S. housing bubble more than a decade ago at Morgan Stanley (NYSE:MS), among other bearish predictions.

“And the job destruction occurring is set to be a lasting feature of this post-Covid world,” he said. “Without labor income from employment, the recovery is going to fall short and that is the stag part of the stagflation scenario.”