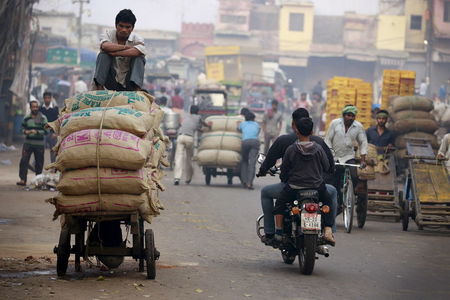 (Bloomberg) -- Until recently feted for its world-beating economic growth, India today is Asia’s coronavirus hotspot, facing a long road out of a crisis that’s left businesses broken and millions jobless.

The blow from a virtual shutdown of a nation of 1.3 billion people has been so severe that economists are struggling to forecast how long it will take to recover. With Asia’s third-largest economy heading for its first full-year contraction in more than four decades -- some say of as much as 5% -- it may be a while yet before India can get back to its halcyon days of 8%-plus growth.

“We believe a catch-up to the pre-crisis trend level of gross domestic product growth will not be possible in the next three fiscal years despite policy support,” said Dharmakirti Joshi, chief economist at Crisil Ltd., the local arm of the local arm of S&P Global Ratings. “Under the base case, we estimate a 10% permanent loss to real GDP, assuming average growth of about 7% between in fiscal years 2022 and 2024.”

The median estimate in a Bloomberg survey of economists is for a 1.9% contraction in GDP in the fiscal year through March 2021, and a rebound to 7.1% next year.

While 7% expansion would be welcome in most places, that pace isn’t enough to generate jobs for the 10-12 million Indians seeking employment every year. It also hurts Prime Minister Narendra Modi’s ambition to turn India into a $5 trillion economy by 2025.

Any rebound may be well short of the spurt seen after the global financial crisis more than a decade ago. India expanded at an average of 8.2% in the two fiscal years following the crisis, boosted by massive fiscal spending, monetary easing and a swift global recovery -- all of which played a key role in ensuring a V-shaped recovery.

“To catch-up would require average GDP growth to surge to 11% over the next three fiscals, something that has never happened before,” Crisil’s Joshi added.

To bolster growth, policy makers have extended support in the form of credit guarantees and removed supply-side bottlenecks in various sectors. But direct cash transfers to citizens have been modest, and the central bank’s sharp interest rate cuts and billions of dollars of liquidity have had very little impact on overall demand so far.

Stung by the extent of the slowdown, New Delhi has laid out a path for a phased reopening of the economy, despite a pickup in infections to more than 200,000, making India Asia’s virus hotspot.

That may provide little lift to the economy which is estimated to have lost more than 120 million jobs in April alone.

“Our baseline scenario assumes the nationwide restrictions are rolled back by end-June, step by step. That would leave GDP contracting 4.5% in fiscal 2021, followed by a sharp V-shaped recovery to growth of 12.8% in fiscal 2022. This still results in a cumulative economic loss of 17.6% of GDP over fiscal years 2020-2022 relative to the pre-virus level.”

“Regarding the time taken by the countries to reach the pre-virus growth levels, the country-wise past recession experience suggests that the recovery in economic activity and the capital formation tends to be slow and it typically takes roughly five to 10 years for real economic activity to reach its former peak level,” said Soumya Kanti Ghosh, chief economic adviser at State Bank of India in Mumbai.

The lockdown is likely to see corporate India’s revenues and profits slump, leading to a sharp jump in bad loans among lenders and crisis-ridden shadow banks, all of which would hurt capital formation and investment activity. Even consumers, whose spending has been fueled by loans and are a key driver of growth, are unlikely to take on more debt at a time when jobs are uncertain.

Economists like A. Prasanna at ICICI Securities and Primary Dealership Ltd. in Mumbai say that shocks tend to have a longer-lasting impact on future growth in emerging markets than in advanced economies.