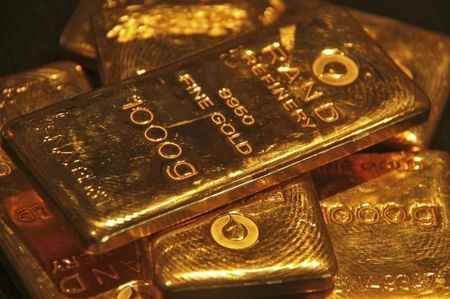 (Corrects percentage moves and prices in last bullet)
Aug 6 (Reuters) - Gold prices held steady near record highs
on Thursday as a weaker U.S. dollar and hopes of more stimulus
measures to mitigate the economic fallout from the pandemic
underpinned the metal's safe-haven appeal.

FUNDAMENTALS
* Spot gold XAU= was steady at $2,039.75 per ounce by 0042
GMT, after hitting an all-time high of $2,055.10 on Wednesday.
* U.S. gold futures GCv1 rose 0.3% to $2,055.90.
* The dollar index .DXY fell 0.2% to hold close to a more
than two-year low against its rivals, making gold less expensive
for holders of other currencies. USD/
* The U.S. government bond yield curve steepened on
Wednesday as prices fell on the prospect of increased supply in
longer-dated debt. US/
* More than 18.66 million people have been reported to be
infected by the novel coronavirus globally, while death toll
surpassed 700,000 on Wednesday, with the United States, Brazil,
India and Mexico leading the rise in fatalities. * The rapid rise in cases has dented hopes of a swift
economic rebound, driving inflows into safe-haven assets such as
gold, which has risen more than 34% so far this year.
* U.S. private payrolls growth slowed sharply in July,
pointing to a loss of momentum in the labor market and overall
economic recovery as new COVID-19 infections spread across the
country. * Top congressional Democrats and White House officials
appeared to harden their stances on new coronavirus relief
legislation, as negotiations headed toward an end-of-week
deadline with no sign of an agreement. * SPDR Gold Trust GLD , the world's largest gold-backed
exchange-traded fund, said its holdings rose 0.8% to 1,267.96
tonnes on Wednesday. GOL/ETF
* Silver XAG= fell 0.4% to $26.91 per ounce, while
platinum XPT= rose 0.4% to $970.67 and palladium XPD= was
steady at $2,181.77.