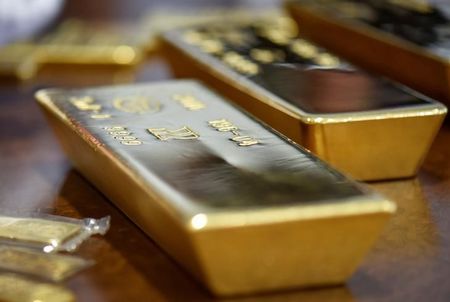 July 28 (Reuters) - Gold jumped more than 1% to a fresh
record on Tuesday, as a weaker U.S. dollar and hopes of more
stimulus measures to combat the economic blow from the pandemic
drove investors towards the safe-haven metal.

FUNDAMENTALS
* Spot gold XAU= was up 1.1% at $1,963.91 per ounce by
0030 GMT after hitting a record high at $1,966.76 in early Asian
trade. U.S. gold futures GCv1 climbed 1.4% to $1,958.80.
* The dollar index .DXY fell 0.1% to hold near a two-year
low hit in the previous session, making gold less expensive for
holders of other currencies. USD/
* Asian nations imposed new restrictions, while an abrupt
British quarantine on travellers from Spain threw Europe's
summer reopening into disarray, as the world confronted the
prospect of a second wave of COVID-19 infections. * Hopes for a quick economic recovery are fading as
coronavirus infections showed few signs of slowing. More than
16.35 million people have been reported to be infected by the
novel coronavirus globally and 649,225​ have died, according to
a Reuters tally. * Senate Republicans on Monday proposed a $1 trillion
coronavirus aid package hammered out with the White House,
paving the way for talks with Democrats on how to help Americans
as expanded unemployment benefits for millions of workers expire
this week. * Gold tends to benefit from widespread stimulus measures by
central banks because it is widely viewed as a hedge against
inflation and currency debasement.
* Meanwhile, China took over the premises of the U.S.
consulate in the southwestern city of Chengdu on Monday, after
ordering the facility to be vacated in retaliation for China's
ouster last week from its consulate in Houston, Texas.
* SPDR Gold Trust GLD , the world's largest gold-backed
exchange-traded fund, said its holdings rose 0.5% to 1,234.65
tonnes on Monday. GOL/ETF
* Silver XAG= jumped 3.7% to $25.52 per ounce, platinum
XPT= rose 0.5% to $950.41 and palladium XPD= gained 0.3% to
$2,318.43.