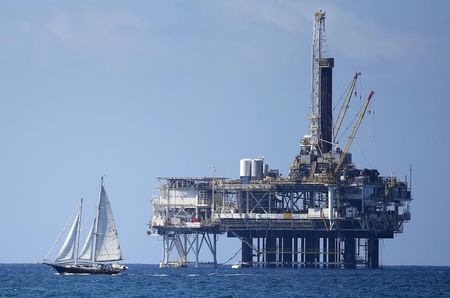 Investing.com - Oil prices jumped 5% after a surprise rebound in U.S. jobs numbers in May. Speculation that OPEC will extend production cuts at its Saturday video meeting also pushed global crude benchmark Brent above the $40 per barrel ceiling again, for a three-month high.

“The oil price rally went into overdrive after a surprisingly robust U.S. labor market report,” Ed Moya, analyst at New York’s OANDA, said, referring to the May addition of 2.5 million jobs that countered analysts’ expectations for a loss of 8 million.

“The economic recovery is already happening and that could do wonders for crude consumption,” said Moya, adding that crude was also climbing on signs that all countries in the OPEC+ group meeting Saturday were agreeable to extending supply quotas, with even “the cheaters promising they will make up their part in the coming months.”

The Saudis and Russians have agreed to support an extension into July of the 9.7 million barrels per day cuts agreed under the multinational OPEC+ agreement struck in April. The oil producing titans were also thinking of imposing conditions for countries that haven’t complied with reduction quotas under the deal, said sources familiar with the situation.

Notwithstanding Friday’s rally, both WTI and Brent are down about 35% this year. But the U.K. benchmark is also up 120% from the end of April. Its U.S. peer has, meanwhile, gained nearly 300% over the same stretch. WTI’s rally is particularly notable, coming off sub-zero prices in late April.

Some analysts have, however, cautioned that the rally in crude may be getting too far, without corresponding gains in U.S. fuel demand.

More startling were distillate stockpiles led by diesel. These soared by 9.9 million barrels, compared with expectations for a build of about 2.7 million barrels. Distillate inventories alone have risen by more than 51 million barrels over the past eight weeks.

There are also worries that U.S. oil drillers who made deep production cuts just two months ago may start bringing a lot of that back online based on the upward momentum in WTI, rather than actual demand for gasoline or diesel.

Such action could ultimately short circuit the oil rally. Case in point was the weekly oil rig count, an indicator of future production, reported by industry firm Baker Hughes on Friday that showed a decline of just 16.  Oil rigs had fallen by more than 60 in certain stretches between March and April when the selloff from oil triggered by the coronavirus was at its peak.