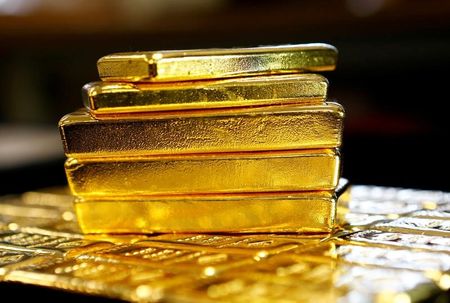 Investing.com -- Gold prices edged lower on Thursday, still under pressure from a Federal Reserve meeting that suggested the U.S. is still far from joining the “race to the bottom” on interest rates that other central banks have embarked on in recent months.

Although the Fed delivered the expected 25 basis-point cut in the target range for Fed funds as expected “they failed to deliver the looser policy message that the market wanted, said Antoine Lesné, head of EMEA strategy and research for SPDR ETFs at State Street (NYSE:STT).

“This less dovish backdrop may weigh on risk assets, while yields could rise a little more,” Lesne said in e-mailed comments. “Meanwhile the case for a strong dollar remains well anchored.”

A strong dollar and rising bond yields are traditionally bad news for gold, which has no nominal return and which is priced in a currency that not everyone outside the U.S. has access to.

As such, gold futures had fallen as low as $1,492 a troy ounce after the Fed’s meeting on Wednesday, but they recovered most of those losses Thursday as bargain-hunters bought the dip.

Away from the U.S., the global monetary easing trend stayed intact, with both Hong Kong and Indonesia cutting their respective benchmark rates in the wake of the Fed action. The central bank of Brazil had also cut its key rate to a new record low of 5.5% on Wednesday.

Two other haven assets, the Swiss franc and Japanese yen, both strengthened against the dollar after their respective central banks declined to follow the Fed in easing at their policy meetings, although both indicated they still had the scope and will to if necessary. The Bank of England also sat on its hands, still boxed in by the threat of a disorderly Brexit.