Why Is Euro Soaring In Face Of ECB Easing?

Why Is Euro Soaring In Face Of ECB Easing?

Be the first to comment
The European Central Bank is widely expected to increase monetary stimulus on Thursday. They would be the only major central bank to ease this week and one of the few to boost accommodation this month. Yet, rather than falling ahead of the rate decision, euro is enjoying its longest stretch of uninterrupted gains versus the U.S. dollar in more than six years. The last time EUR/USD closed higher for seven straight trading days was in December 2013. This counterintuitive price action can be confusing particularly as the central bank is expected to release grim economic projections.
So why is euro soaring in the face of ECB easing? There are a few reasons to explain the move.
First, the U.S. dollar fell sharply this week as risk appetite improved and euro became a natural beneficiary. The recent correlation between stocks and the euro has been very strong. Secondly, this week’s Eurozone economic reports were mostly better with PMIs revised higher. German unemployment rolls and its unemployment rate rose more than expected but the number of jobless claims was down from April. Lastly, the prospect of a 500-billion-euro increase of their Quantitative Easing program has been widely telegraphed and may be completely priced in.
Last week, ECB President Christine Lagarde said its very likely the ECB’s “mild scenario is out of date” and the economy is likely between the central bank’s “medium to severe scenarios,” which means GDP could fall between 8%-12% in 2020. ECB Isabel Schnabel was more blunt, saying they are ready to expand tools to achieve their mandate. ECB vice-president Luis de Guindos said the central bank is totally open to recalibrating their stimulus program, while Chief Economist Philip Lane says the economic shock requires expansionary fiscal and monetary policies. This degree of uniformity almost guarantees a dovish outlook and more easing that could put a halt to the euro’s rally.
Not only is ECB expected to ease, but there’s little doubt that they plan to increase stimulus further in July or September. So far, they’ve spent only a third of their 750-billion-euro program and while lockdown restrictions are easing in Europe, a full recovery is still a long time away. If the central bank eases by more than 500 billion euros, it would put a halt to the currency’s rally and send EUR/USD below 1.10. If they ease by 500 billion euros, downgrades their growth projections for 2020 and 2021 and telegraphs further stimulus, we should see profit taking in the currency. However, if bond purchases are increased by 500 billion euros and Lagarde talks up the recovery, EUR/USD could hit fresh two-month highs but we think this scenario is unlikely as it could wreck havoc on the bond market. Taking a look at the table below, there’s still more deterioration than improvement in the Eurozone economy but the upticks in PMIs, ZEW and IFO are important forward looking indicators.
As widely expected, the Bank of Canada left interest rates unchanged today. This was the last meeting for Bank of Canada Governor Stephen Poloz and there was no press conference. Tiff Macklem succeeds Poloz tomorrow so the next major meeting will be in July. With that said, their economic projections were less pessimistic as the BoC pared back estimates for an economic downturn to 12% to 22% from 15% to 40%, which sent USD/CAD to fresh 2.5 month lows. The New Zealand dollar extended its gains against the greenback but interestingly enough, the Australian dollar peaked despite better than expected data. GDP fell 0.3% in the first quarter versus a forecast of -0.4%. Building approvals dropped 1.8% against -10.7% forecast and the construction PMI index increased to 24.9 from 21.6. Retail sales and the trade balance are due this evening and while spending should fall in April because they rose in March, the trade surplus could drop less than expected.
The U.S. dollar was mixed despite better than expected ADP (NASDAQ:ADP) and ISM data. Private payrolls fell by only 2.76 million compared with a forecast of -9 million. Last month’s numbers were also revised higher. Non-manufacturing ISM or service sector activity contracted at a slower pace with the index rising from 41.8 to 45.4 in the month of May. The details of the report show labor market conditions improving albeit slightly with the employment component rising to 31.8 from 30. The biggest uptick was in business activity and new orders which is a promising sign for the economy. 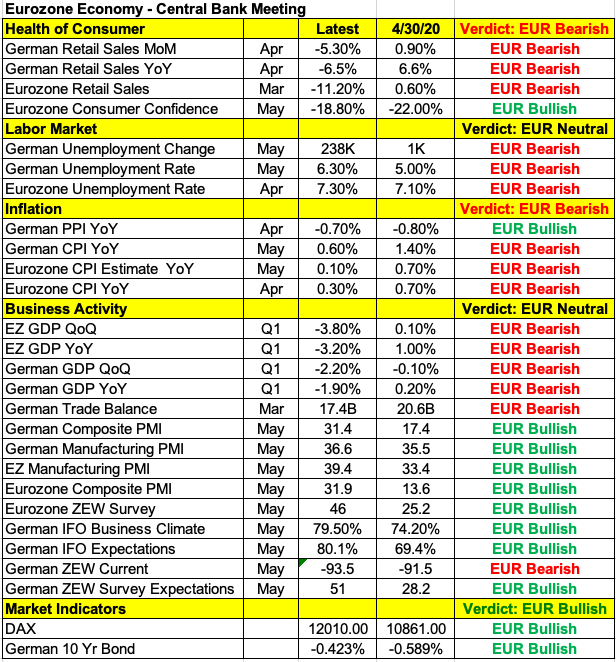