Week Ahead: Array Of Fundamental Catalysts Will Spur Next Major Market Moves

Week Ahead: Array Of Fundamental Catalysts Will Spur Next Major Market Moves

An array of catalysts will likely propel markets to another major move in the coming week. The unanswerable question at this point is, of course, whether it will potentially be the start of another surge or alternatively an additional correction.

American benchmarks—including the S&P 500, Dow Jones, NASDAQ and Russell 2000—all jumped on Friday, their highest moves in more than a month. The main driver: November’s Nonfarm Payrolls release which showed stronger than expected results including 266,000 new jobs created, an unemployment rate that dropped to 3.5%, returning the metric to a 50-year low, a slight uptick in wages YoY and upwardly revised job gains for the two previous reads, to boot.

While the labor market chugs along, manufacturing weakness lingers. The Institute of Supply Management Index fell last week, sinking more deeply into contraction, for the fourth month in a row, nearing a decade low. Investors must decide whether the broader economy can withstand persistent weakness in manufacturing as it did for five consecutive months during 2015. The worst drop at the time was -15% in the second half of that year.

However, from our current perspecitve, as we now know, stocks have bounced back and then some. Since the December low four years ago, equities are up 75%. Is there more juice in this longest expansion on record? Stay tuned.

The Fed and European central banks, including the ECB, SNB and the Central Bank of Russia are expected to keep rates unchanged. In the UK general election, Prime Minister Boris Johnson is forecast to win, paving the way for Brexit.

Trade remains the wild card. Investors may begin to insist they be given a credible signal that the U.S. will scrap additional duties on Chinese goods, which are set to go into effect on Dec. 15. These tariffs are scheduled to be levied on consumer goods, which would be most painful for the consuming public, thereby pressuring politicians to come up with a final, at least partial, trade agreement.

Nevertheless, from a technical perspective, stocks are ripe for another exuberant rally. 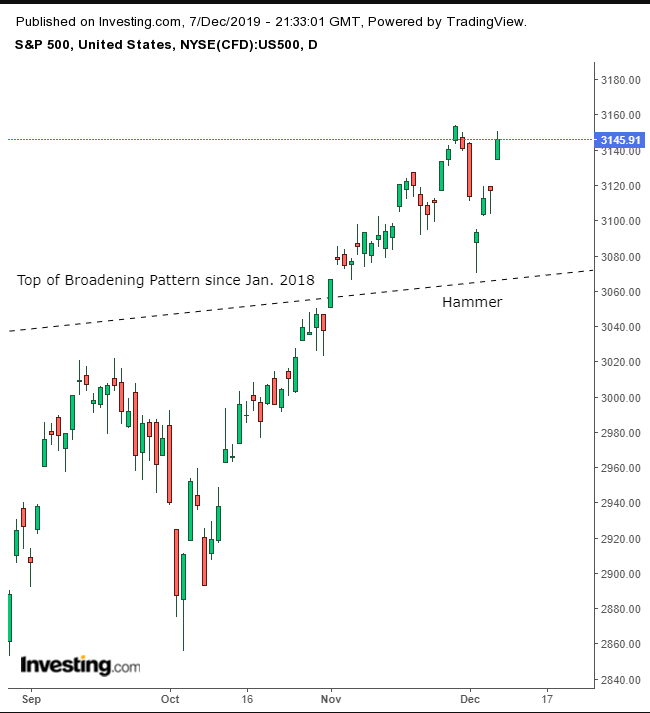 While macroeconomic data and technicals look positive, keep in mind Yoda's quote in about the future from Star Wars: "[It's] difficult to see. Always in motion the future.” 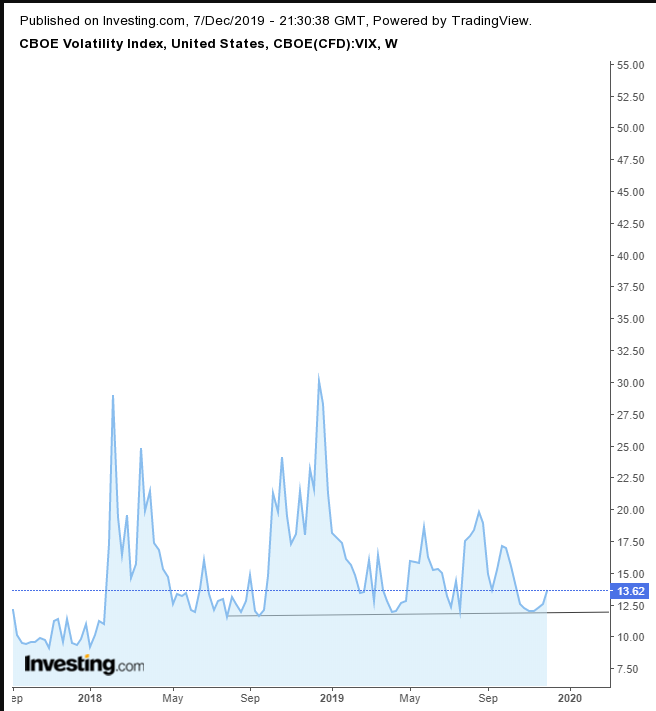 On a weekly basis, the VIX reached the 12.00 level and curved back up. This level has been staunch support since July 2018. Will volatility return to the 20 levels seen in May and August, or even to the highs seen in February and December 2018, in the 30s?

Global growth headwinds generated by trade friction have helped pull benchmark U.S. 10-year yields down about 80 basis points in 2019, driving Treasuries to a 7.3% return this year through Dec. 5. That's shaping up to be the best annual performance for the sovereign note since 2011. 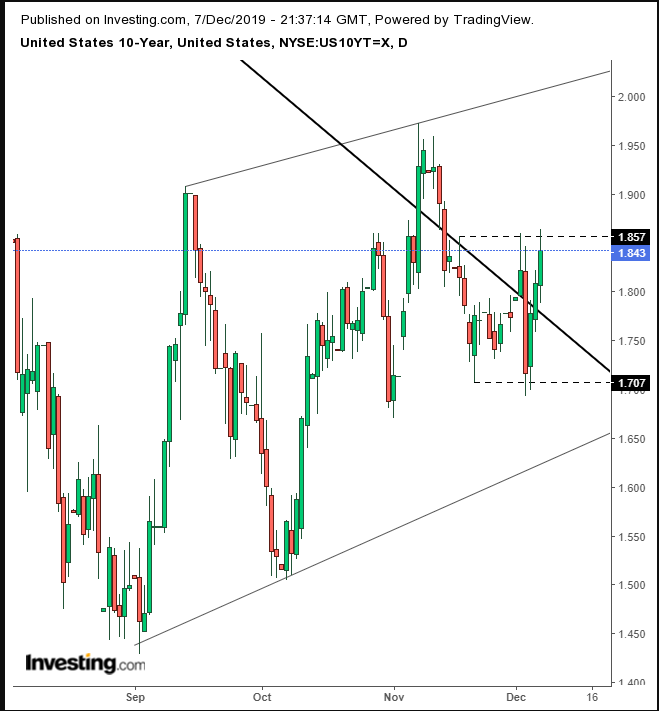 Technically, yields have been trapped in a range since rates attempted to cross above the downtrend line since November 2018 (thick line). On Friday, the top was penetrated after the great jobs report, but ultimately closed below it, demonstrating there's remaining supply. 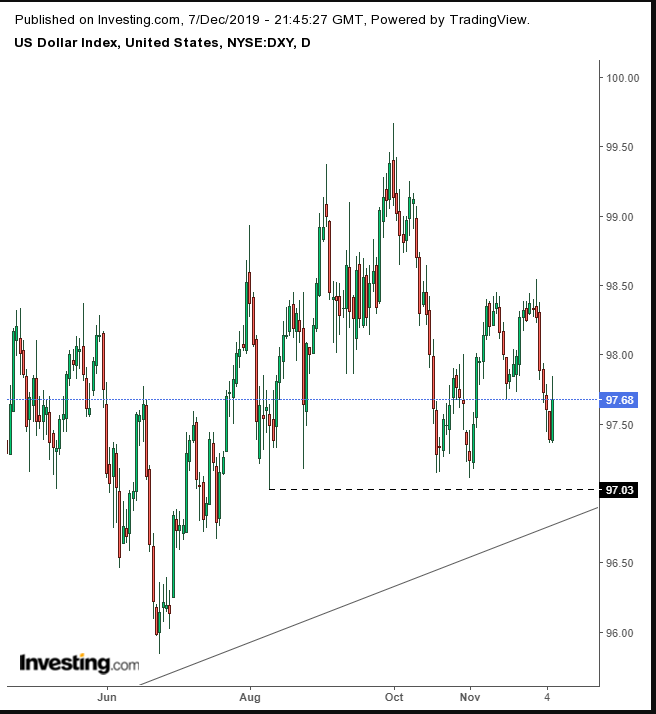 Like yields, the dollar received a boost from the NFP beat, bouncing above the lows in place since August, as well as the uptrend line since mid-June 2018. 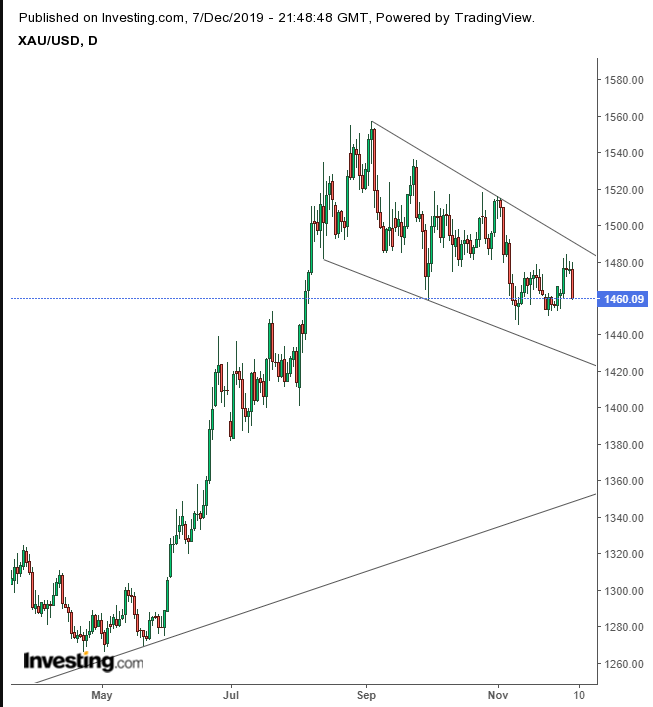 Risk and a stronger dollar both weighed on gold. The yellow metal slumped along its falling channel, as traders took profit after the 22% surge for the precious metal in the three months from June to August. 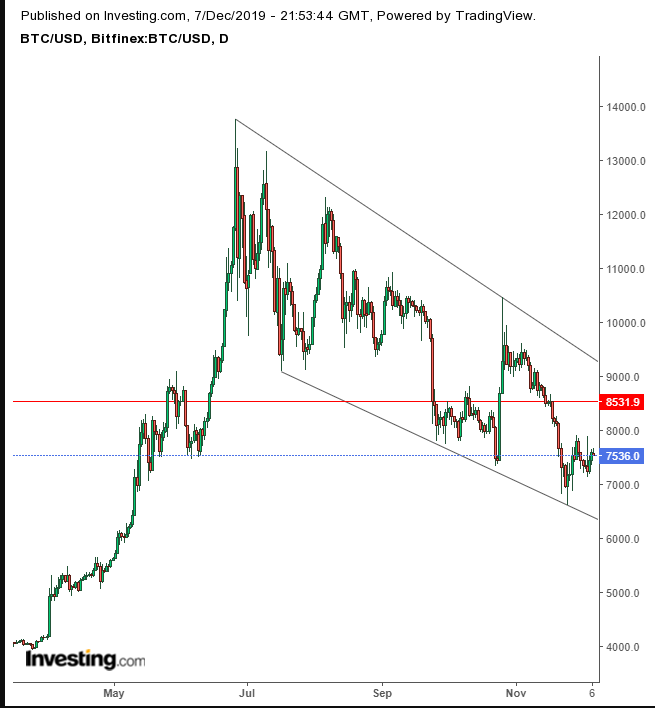 While the technical pattern for Bitcoin, the so-called “digital gold,” may appear similar to that of the yellow metal, it is in fact 11.7% down over the same period during which physical gold remains up 10%. 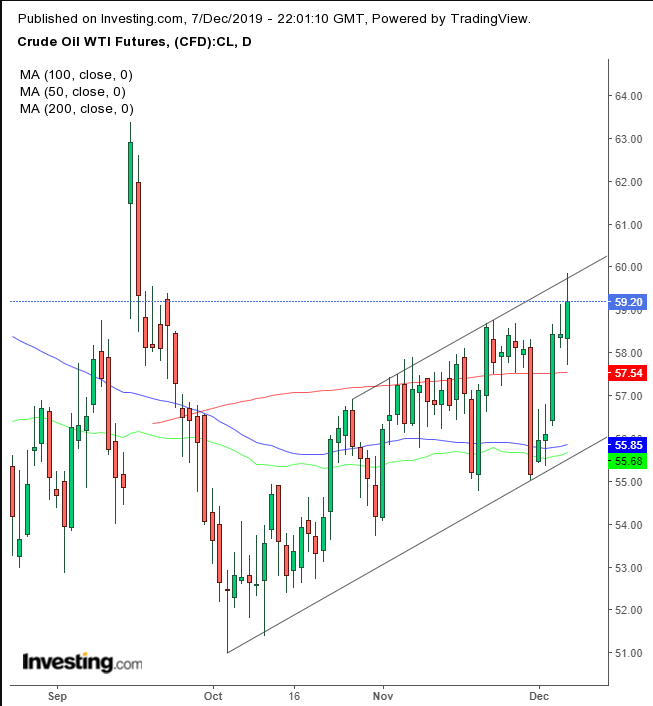 Oil reached its highest price since Sept. 17 last week, as OPEC and Russia announced they'll cut production further, in an attempt to support oil prices that have fallen from the $75 levels of 2018. Technically, crude scaled above the 200 DMA, but found resistance at the top of its rising channel, priming take-profit inclinations and driving the commodity back toward the bottom of the channel, currently at $56.

All Day - UK General Election: this election is expected to decide the fate of Brexit though many believe the choice between Boris Johnson's pro-market Tories and the socialist-led Labour opposition is stark.