Tesla Shares Are Soaring On Q1 Sales, But Will It Last?

Tesla Shares Are Soaring On Q1 Sales, But Will It Last?

The rally in Tesla (NASDAQ:TSLA) shares is gaining powerful momentum amid a flurry of positive news, cementing a bullish case for the electric carmaker which some analysts believe could emerge stronger after the economic downturn triggered by the coronavirus pandemic.

The stock has gained more than 30% during the last five sessions and more than doubled since the March 18 close. It rose more than 2% yesterday to finish the session at $745.21.

The rebound has added to the 78% rally this year, putting Tesla in the group of mega technology stocks, such as Amazon.com (NASDAQ:AMZN) and Netflix (NASDAQ:NFLX), that emerged unscathed from the steepest market slide on record. 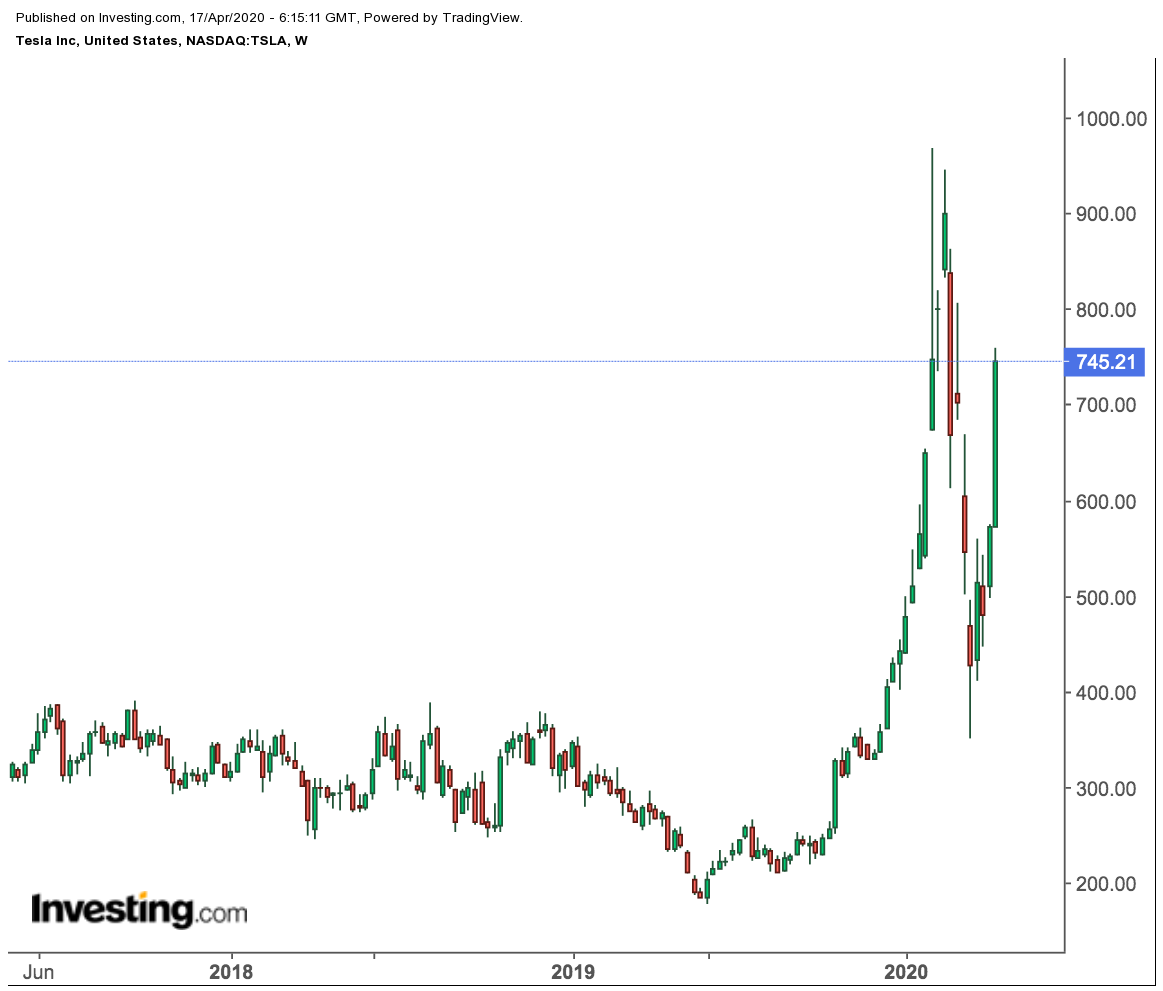 Tesla is now again hovering close to the $767 level at which the company raised money through a share offering in mid-February. It dropped to a low of around $360 in March amid the virus-related meltdown in equity markets.

The latest surge in the shares came after Goldman Sachs recommended investors buy the stock with a Street high price target of $864. Tesla has a significant lead over other automakers in making electric cars and is expected to maintain a strong market position, Goldman analyst Mark Delaney wrote in a report.

What’s helping Tesla is its strong brand, vertical integration and early-mover advantage in an industry with generally long development cycles where it takes about two to four years to roll out new models.

“The Model Y will help Tesla to have more traction in the important SUV and crossover market as the price is lower than the Model X,” the analyst said.

Strong Demand for Its Cars

The vote of confidence from Goldman came after Tesla last week released a better-than-expected sales report, raising expectations that the company was in a stronger position to withstand the coronavirus-triggered slowdown.

Tesla delivered 88,400 vehicles worldwide in the first quarter, down 21% from the last three months of 2019. But the total was still better than analysts’ average estimate for about 78,100.

According to Goldman, Tesla stands to benefit from the fast changing dynamics in the auto industry where the gasoline price even at about $2 per gallon won’t produce any advantage for traditional carmakers.

The total cost of ownership for electric cars is already competitive with vehicles powered by traditional internal-combustion engines in select categories, including mid- to high-end cars, Delaney wrote.

“We expect the total cost of ownership for electric vehicles to become increasingly attractive over time as battery prices fall and internal-combustion engine cars have added costs to meet emissions requirements,” he said. Goldman’s newly created global autos team expects electric-car penetration to rise to almost 15% by 2030, from 2% in 2019.

Bulls rallied behind Tesla this year, when founder and CEO Elon Musk, after years of over-promising and under-delivering, successfully turned a corner. The company beat analyst revenue estimates for Q4 and accelerated the introduction of the new Model Y crossover.

As well, the completion of its Shanghai factory and the company's success in exceeding its ambitious goal of selling 360,000 vehicles for the year also offered a powerful signal that Tesla could rapidly become a meaningful industry player if it continues to meet its targets.

While providing Q1 sales data, Tesla didn’t give an update on whether it will be able to meet its 500,000 unit target for car sales this year. The company also didn’t say how many vehicles it built during the quarter at its plant near Shanghai, which started production late last year.

Needham analyst Rajvindra Gill believes it would be better to remain cautious on Tesla as demand for cars has largely collapsed in North America and Europe. In a note last month Gill said:

“In the long-term, we continue to expect margin pressure from declining sales of higher-margin Model S & X vehicles, a lower mix within Model 3, and competitive pressures from other automakers as they launch their electric vehicles over the next few years.”

Tesla’s ongoing momentum certainly shows that the company is in a much better position to weather the current economic slump than other carmakers. The company’s first-quarter earnings report this month, tentatively scheduled for Wednesday, April 29 after the close, should be able to show whether the current optimism is backed by fundamentals.