Sell the front, buy the back.

The classic trade developing in natural gas — or, for that matter, in oil or any commodity with a hopeless immediate outlook now — is creating a huge price gap between Henry Hub’s spot contract and the market’s real sweet spots: summer and the forthcoming winter.

With bulls getting further crushed by the trap laid in the April 3-7 rally — Henry Hub’s spot contract for May fell to a two-week low under $1.60 per million metric British thermal units on Tuesday — the place for bulls to hide may indeed be in the farther months. 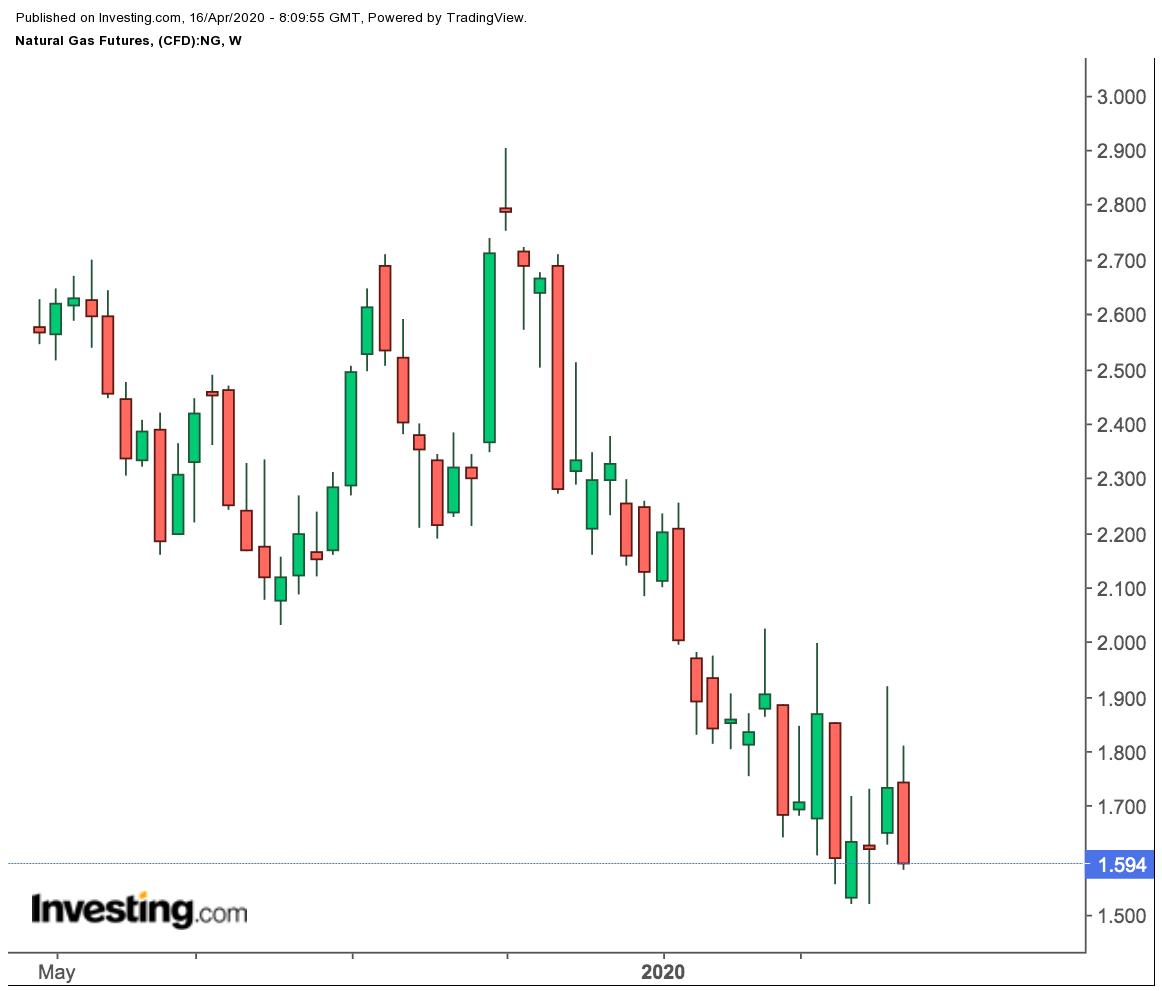 With the U.S. Energy Information Administration expected to report on Thursday a weekly gas injection into storage nearly double the previous week and almost triple the five-year average, it wasn’t surprising to see the front-end of the market tank.

For what it’s worth, analysts tracked by Investing.com have a consensus for an injection of 64 billion cubic feet for the week ended April 10 versus the 38 bcf fill for the week to April 3. That 38 bcf itself was a disappointment for those who had gone long on the forecast that the EIA would report an injection as low as 24 bcf.

Another Wrench Likely To Be Thrown at Demand

“I think the market is anxiously waiting on the EIA data, which could throw another wrench in the demand story that we have seen from the scrapes,” said Scott Shelton, energy futures broker at ICAP in North Durham, North Carolina. “Expectations of the build are in the low 60s. I would think the bears are looking for a bust on this.”

Dominick Chirichella, director of risk and trading at the Energy Management Institute in New York, had a similar view.

“I am maintaining my Nat Gas view and bias at cautiously bearish as a warming trend is emerging over major parts of the U.S. for the next several weeks,” Chirichella wrote on Wednesday.

“However, the winter months are still strong as many in the market are still expecting a strong decline in Nat Gas production in conjunction with an expected decline in crude oil production,” he added.

Eye-Popping Premiums in Farther Out Months

And with the 14% loss of the past five sessions taking much of the wind out of the previous three-day run-up of 18% on the front-month, the risk-reward ratio seems to be growing for the emerging summer/winter bets.

Myers said he expected excess gas to continue piling in the market from loss of commercial heating demand from early spring due to coronavirus-related closures and maintenance work on pipelines that supply LNG terminals and exports to Mexico. In contrast, reduced production expected in coming months has yet to have an appreciable impact on current volumes, he added.

“Impacts on natural gas demand have become sharper and clearer while weeks pass with employees working from home or on leave and businesses and manufacturing shuttered as the U.S. attempts to control the spread of coronavirus,” Myers said.

Gelber & Associates’ modeling, after adjusting for temperatures, accounts for a loss of about 5 bcf per day of demand destruction, he said.

“There are various examples of large end-users idling operations like Nucor’s DRI plant recently announced in Louisiana. Most recent data suggest ~1.5 bcf/d of decreased demand (apart from weather) is coming from the industrial sector alone and this will expand if closures are prolonged or economic activity remains crippled longer-term.”

Beyond Thursday’s EIA report, Gelber & Associates expects current chilly, spring weather to restrain the next weekly injection considerably to 13 bcf, Myers said, adding, however, that “a warming trend by the end of the month will allow storage increases to grow to the 90-100 bcf range going into May.”