In The Current Market Rout, Here's Why Netflix Stock Stands Out

In The Current Market Rout, Here's Why Netflix Stock Stands Out

Major stock market corrections are often seen as ideal opportunities by long-term investors to snap up shares in solid, high value businesses at rock-bottom prices. The current plunge, triggered by the global outbreak of coronavirus, is no different. Long-term-focused investors will be watching closely for the right moment to take advantage.

Of course, no one knows how long this will last. But, according to Benjamin Graham, the great investment analyst of the 20th century and Warren Buffett’s mentor, investors should reconcile themselves to the probability that stocks will fall by 33% or more at least once every five years.

As of Monday’s close, the Dow, S&P 500 and NASDAQ Composite were around 19% below their all-time highs, which they reached in mid-February, as they struggled to continue their decade-old bull run.

So, if you're a do-it-yourself investor and sitting on the sidelines with cash, the recent slide in stocks might soon offer you the opportunity to buy some of the best stocks available at vastly reduced prices. Today, we've picked Netflix (NASDAQ:NFLX), in order to analyse whether its shares are positioned to perform better in this slump. 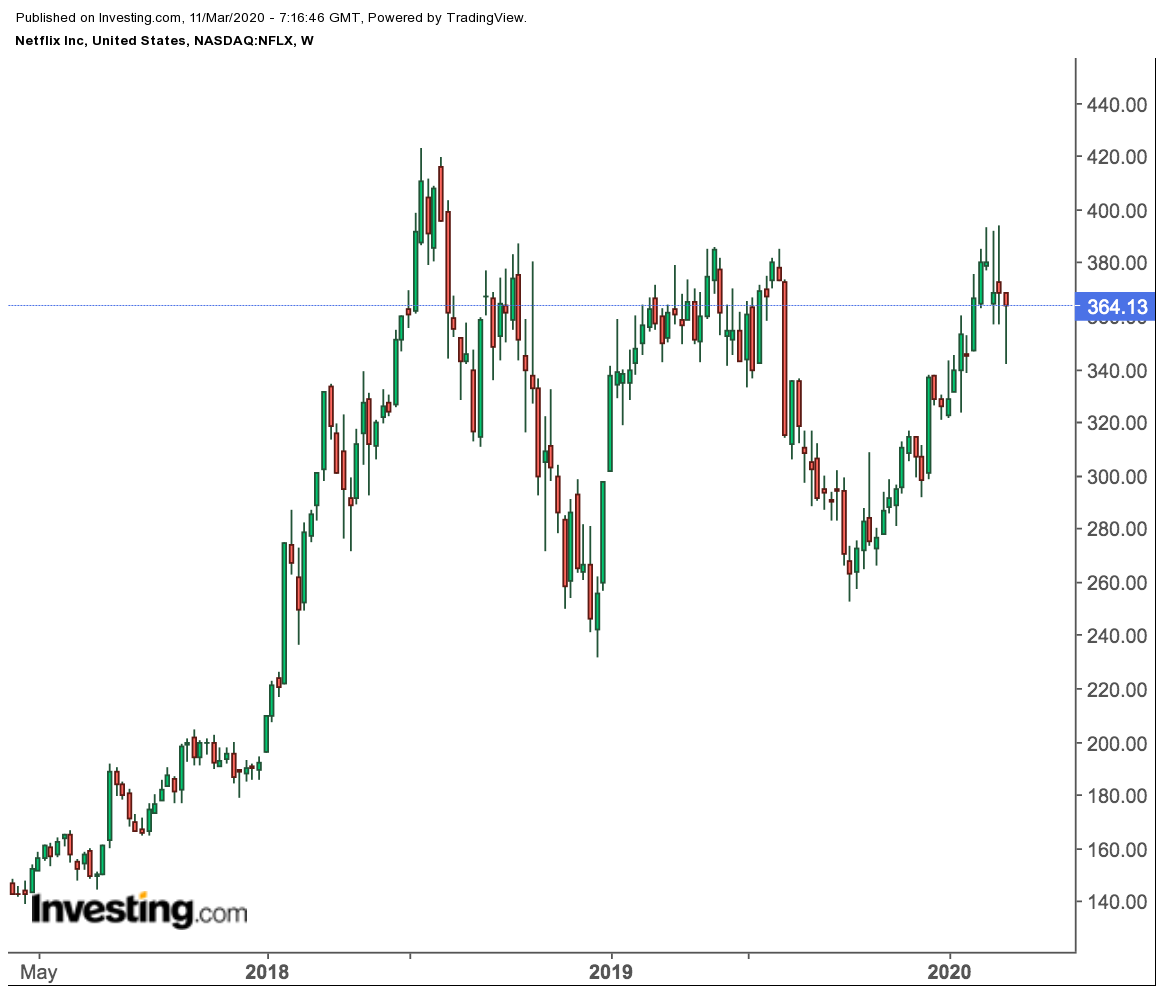 The streaming-entertainment giant is holding up quite strongly in the current sell-off, which has hit high growth technology stocks quite hard. This unexpected resilience comes after Netflix’s dismal performance in 2019,  which saw its shares lagging far behind the rally that pushed so many other mega tech stocks to new highs.

But during the past month, Netflix has been the best performing name among the FAANGs, the group of five mega cap tech stocks that includes Apple (NASDAQ:AAPL) and Amazon (NASDAQ:AMZN). These stocks were among the biggest contributors to the market’s extended rally that lifted the S&P 500 to a record of 3,3923.62 just last month.

Before yesterday's session, Netflix's shares had lost about 6% in the preceding four week period, while the S&P 500 plunged 17%. Yesterday's rally saw the stock gain more than 5%, to close at $364.13.

The popular theory explaining Netflix's outperformance in this highly bearish and uncertain environment is that being one of the “stay-at-home” stocks, Netflix would be a beneficiary of COVID-19, as its subscribers will spend more time at home watching the streaming platform's content.

That logic, for some analysts, doesn’t carry much weight. According to independent investment banking and asset management firm Needham, the virus could actually hurt Netflix whose streaming services should be in the “luxury” bracket at a time when paychecks from employment are gone.

“NFLX charges a fixed amount per month and does not benefit economically from additional viewing hours by its subscribers,” analyst Laura Martin said in a note to clients on Tuesday.

Instead of focusing on this short-term reason to buy the stock, in our view, investors should reevaluate Netflix for other positive catalysts. One is that it will take much longer for new entrants in the video-streaming market to meaningfully hurt Netflix's leading position should we come up against a serious and prolonged recession.

It will become harder for Netflix's biggest rivals to spend aggressively and expand their market share as the appetite for additional entertainment services diminishes when people start losing their jobs.

Key competitors Disney (NYSE:DIS) and Apple (NASDAQ:AAPL) both launched their own streaming services, Disney+ and Apple TV+, in November. Going forward, AT&T's (NYSE:T) WarnerMedia plans to launch HBO Max in May and Comcast's (NASDAQ:CMCSA) NBCUniversal will introduce its Peacock service in the U.S. on July 15.

Though Netflix missed its forecast for U.S. subscriber growth for the third straight quarter when it released its 4Q earnings report in January, its overseas expansion continues unhindered. The Los Gatos, Calif.-based company posted an increase of 8.3 million subscribers in overseas markets, more than the 7 million the company was expecting. It now has 167 million subscribers worldwide, including 60.4 million in the U.S.

Some analysts see a silver lining for Netflix in these numbers. “It is clear Disney+ engagement trails that of Netflix and this reinforces our view that Disney+ is not a substitute,” Bank of America analyst Nat Schindler said in a note, adding that viewing hours per Disney+ subscriber “widely trail those of Netflix.”

In the face of the current, grim economic outlook, many technology companies are likely to trim their growth forecasts and shrink their spending plans. In that potential scenario, Netflix could be the net beneficiary as its competitors delay their launches and find it tough to attract subscribers.