Does Buying Tech Stocks In 2020, After A Decade Of Gains, Make Sense?

Does Buying Tech Stocks In 2020, After A Decade Of Gains, Make Sense?

Technology stock investors have made fortunes over the past decade. The combined share values represented in the tech-heavy Nasdaq 100 has jumped by more than $7 trillion since 2009, with last year proving to be the best since the decade-long bull run began.

After this remarkable rally, investors are starting the new year wondering whether the fundamentals still justify buying into the behemoths of the tech sector that powered most of it.

In 2019 alone, Apple (NASDAQ:AAPL) almost doubled in value. Microsoft (NASDAQ:MSFT) surged close to 60% and the social media giant Facebook (NASDAQ:FB) jumped some 50%, helping the Nasdaq to pull in its biggest yearly increase since 2009. 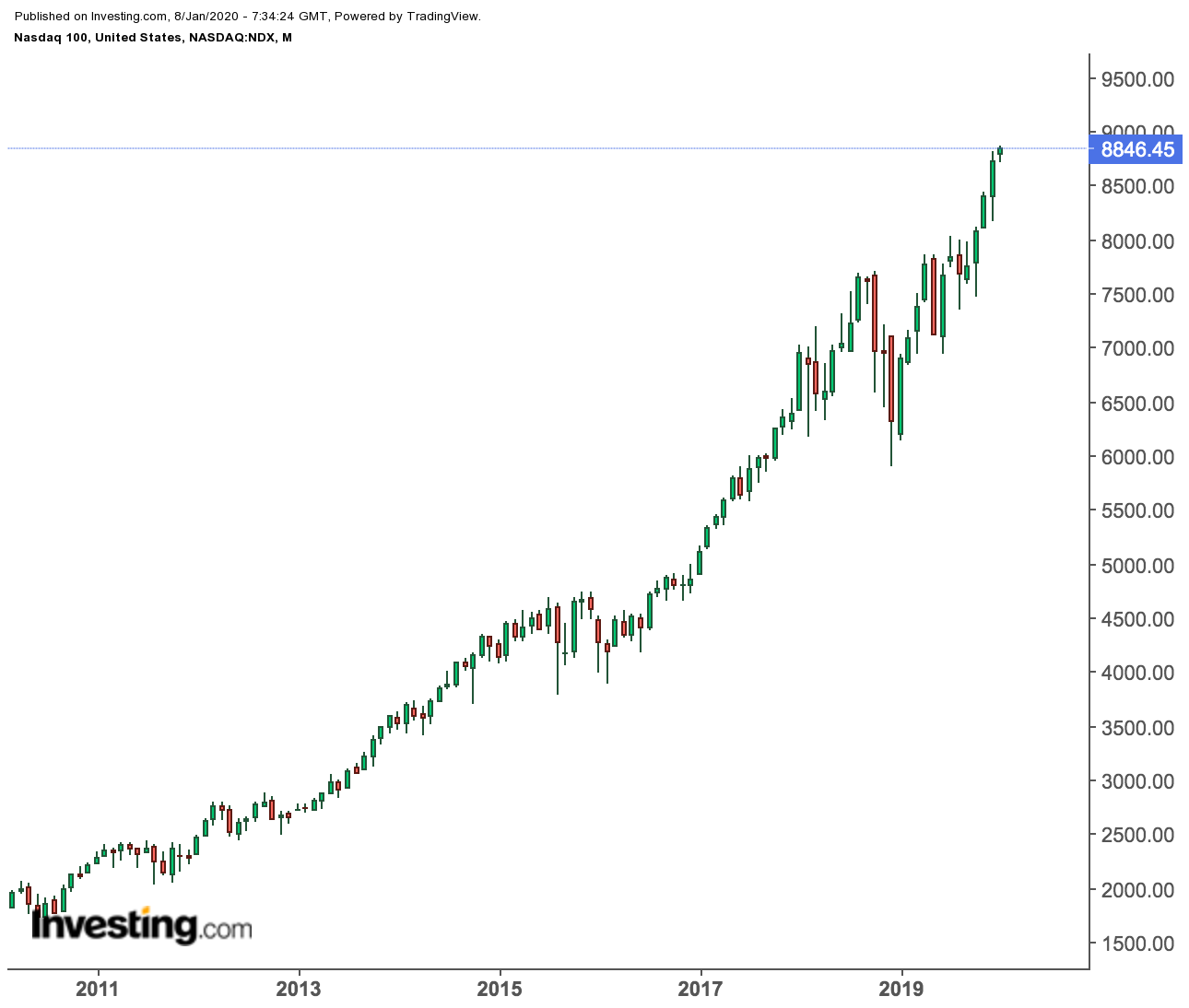 But after this giant leap, investors are concerned that tech stocks have become vulnerable to a sharp downturn and that this business cycle is close to its peak. The uncertain situation could make stocks volatile, even more so if earnings growth fails to justify the rich valuations. The Nasdaq trades at 34 times annual profits, suggesting tech stocks won’t come cheap for those investors planning to enter the market now.

That said, there are still many opportunities for investors who have time on their side and who are able to remain invested over the long-term. For investors who can hold the positions over the next five to ten years, adding some solid tech stocks to their portfolios would not be a bad idea in 2020.

Old Pillars of the Tech World

Among the old pillars of the tech world, we like Microsoft despite its shares trading at a record high after finishing the best year in a decade. This year, the primary point-of-focus for investors should be how Microsoft is performing in the growing cloud computing market where it competes against Amazon (NASDAQ:AMZN) and Alphabet (NASDAQ:GOOGL), Google's parent. 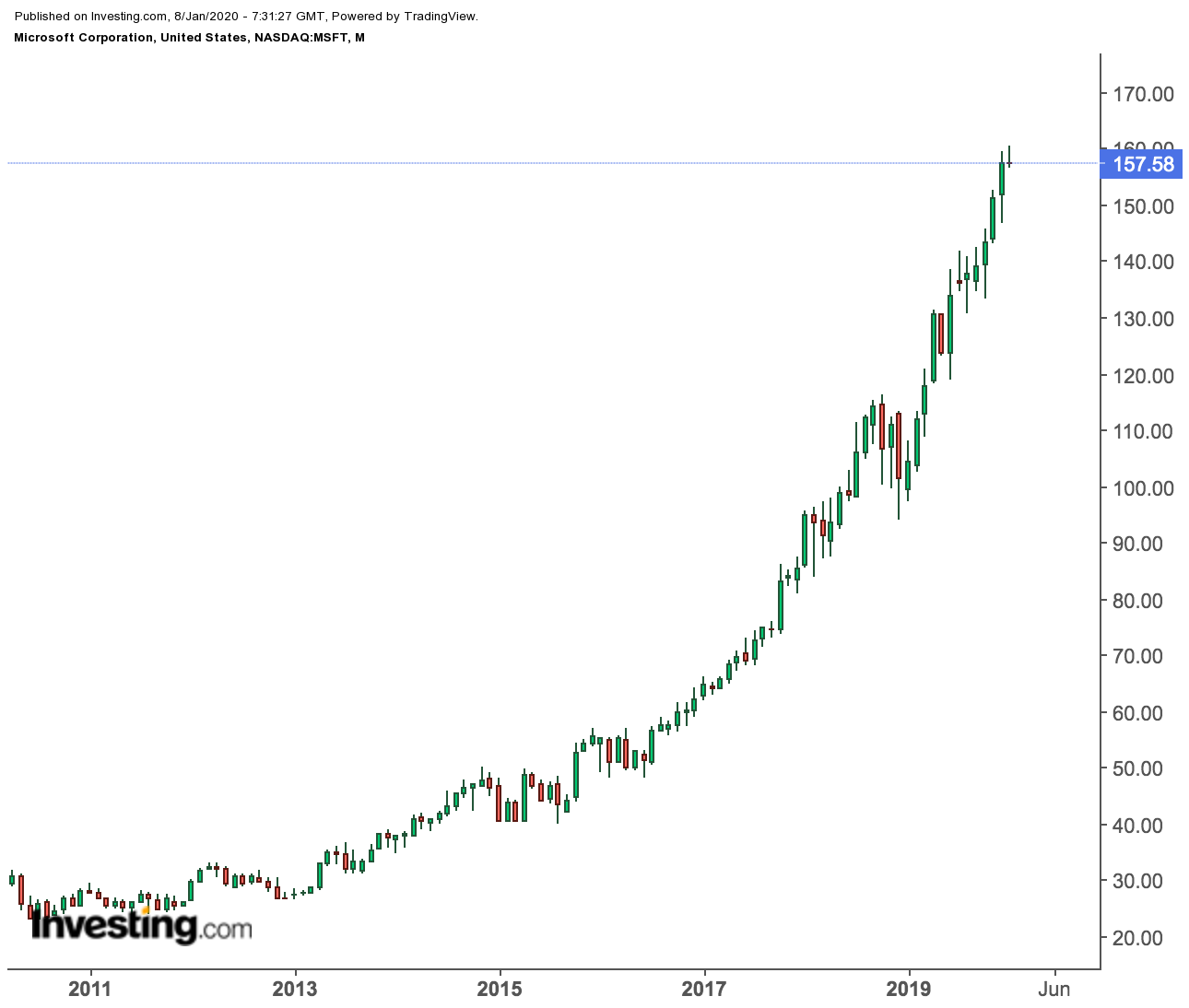 In our view, the adoption of cloud services will be a major driver for Microsoft in the future and the company should be able to expand its margins as this business gains scale. In the past quarter, Microsoft scored the Joint Enterprise Defense Infrastructure, or JEDI, contract to supply its Azure cloud services to the Defense Department, a deal that could be worth up to $10 billion.

Adding to the appeal of Microsoft as an attractive investment during an uncertain economy is its rock-solid dividend and excellent track record on payouts. Since 2004, when the tech giant first began paying a dividend, its disbursement has swelled more than four-fold. Microsoft's current annual dividend yield is 1.29% with a quarterly dividend of $0.51 per share.

Similarly, Apple stock remains in a solid position to reward its long-term investors after outperforming all other megacap technology stocks in 2019 with a gain of 86%, its best year in a decade. 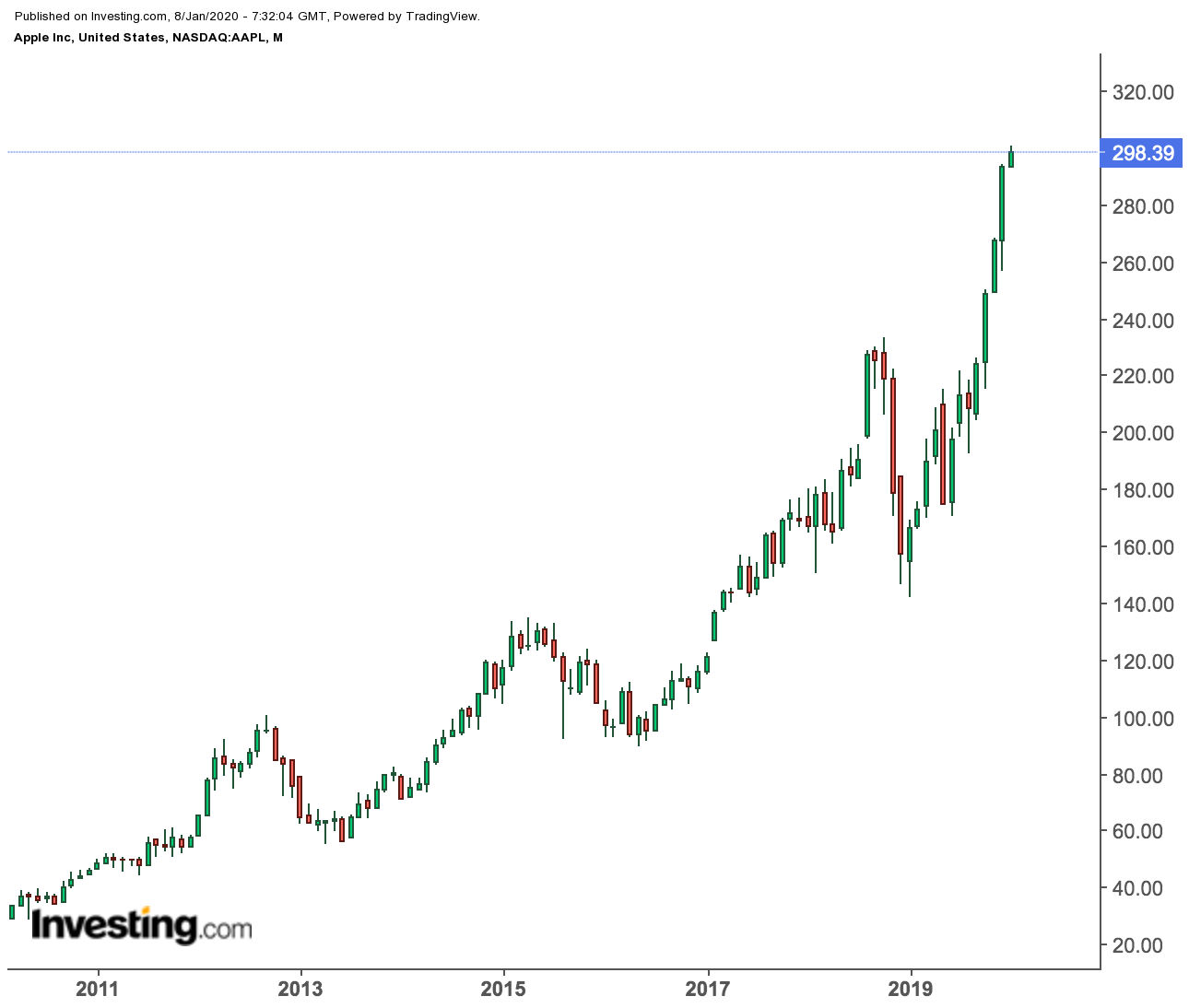 That momentum might gather pace as the maker of iPhones benefits from the release of its next generation of iPhones that are capable of operating on 5G networks. That's scheduled to happen in the fall.

The company is also expected to release a new low-cost phone in the first half of the year.

In addition to Apple’s great innovation and design capabilities in the cellphone segment, the company’s nearly 1.5 billion user-base and its auxiliary products like the Apple Watch and AirPods are there to produce growth and recurring revenue. That powerful combination, in our view, is what separates this company from other tech stocks.

It’s almost impossible to predict what a new year will bring for investors in stocks. The majority of analysts, however, agree on one point: it won’t be a repeat of 2019 when virtually every major asset class delivered once-in-a-decade returns. For investors in high-growth, or risky stocks, sticking with solid megacaps that generate strong recurring revenues and are in a good position to withstand any economic shock is a strategy that should work — especially when the upside is limited.