It's becoming apparent that governments are not yet equipped to manage the coronavirus outbreak. Equity markets have been signaling these worries for days now.

And, we predicted earlier this week that even a Federal Reserve interest rate cut wouldn't be able to save the market. But we underestimated how quickly and powerfully it would crash. 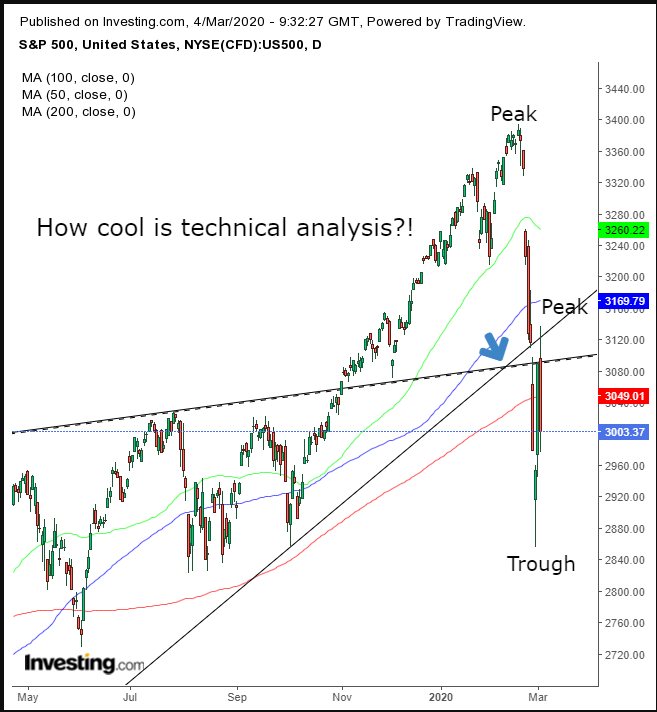 This is precisely the sort of environment that would normally benefit assets that offer some protection from economic turmoil. The discussion over whether Bitcoin can be seen as a safe haven or not continues.

But even if it doesn't merit that description, the largest crytocurrency by market cap should still benefit from anyone frightened of contracting a scary virus, either via personal contact or through germs lurking on the surfaces of hard cash.

Why then are Bitcoin technicals indicating another fall?

Perhaps there's more going on under the surface. U.S. futures are roaring right now, within their up-down pattern for the past four days, but below the confirmed resistance of a pattern in place since January 2018, suggesting these rallies are temporary. 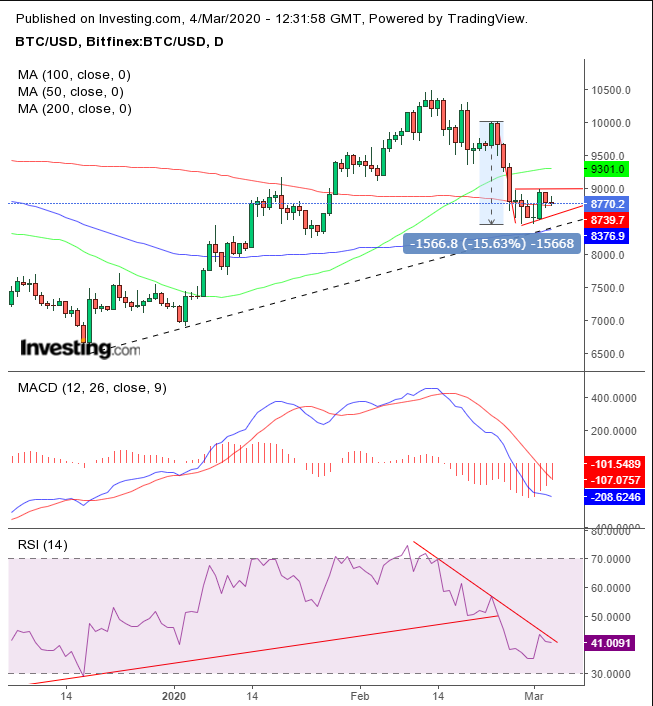 Bitcoin has been ranging for a week, after a 15.6 % plunge in as little as four days. This behavior is indicative of a changing-of-the-guard—a move from bears who enjoyed a very profitable, but also very unnerving roller coaster ride, toward hopefuls who are praying they haven't missed their chance and are now getting in place to benefit from another expected ride down.

The continuation pattern developed above the uptrend line since mid-December, like an athlete taking a few steps back before a vigorous jump.

The puzzle that is being pieced together before our eyes includes a price fluctuating around the 200 DMA. The recent golden cross followed the vigorous 58% jump in less than two months, from mid-December to mid-February.

This move, coming after the 53% drop since the June 26 high of $1,376.40, jerked around the moving averages. If bears manage the downside breakout, the recent golden cross will only play into their hands, as they hand over Bitcoin as hot as a burning iron to unsuspecting bulls.

Conservative traders would wait for a downside breakout, followed by a return move that retests the new expected resistance of the pattern and the broken uptrend line, before committing to a short position.

Moderate traders will likely wait for the downside break and subsequent pullback for an entry closer to the resistance and the stop-loss, rather than to confirm the trend’s downward bias.

Aggressive traders would sell now, hopeful that the market mechanics resume along with the setup for a completed continuation pattern, going back into the fall from $10,500.