At Below-Zero USD, U.S. Crude Is Exactly Where The Saudis And Russians Want It

At Below-Zero USD, U.S. Crude Is Exactly Where The Saudis And Russians Want It

Donald Trump calls at least one of them his “friend,” and has spoken on the phone with the other four times this month alone.

Yet, few might be more pleased than Saudi Crown Prince Mohammad bin Salman and Russian President Vladimir Putin with the historic sub-zero-dollar finish in U.S. crude on Monday. Finally, something eyed for years by the two leaders with cozy ties to the U.S. president seemed possible: the slow and sure destruction of America’s shale oil industry, which will take many more years to rebuild. 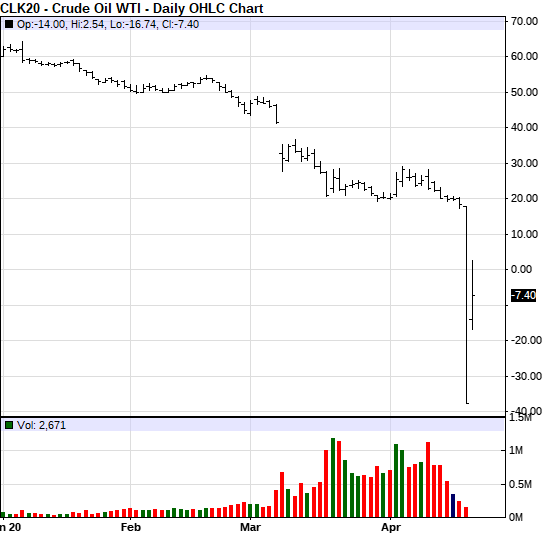 The coronavirus pandemic has reduced demand for oil like the world could have never imagined, with an estimated four billion people, or half of the earth’s population, under some kind of restricted movement.

Yet, the challenge faced by WTI is a lot greater than its competing benchmarks as storage space for crude in the United States appears to be shrinking faster than anywhere else in the world.

As of Monday, the Cushing, Oklahoma hub that serves as delivery point for the expiring futures of the U.S. benchmark had an estimated 60 million barrels stored, versus a capacity of about 90 million.

At the rate Cushing is building — an average of 16 million barrels weekly over the past three weeks — analysts say the hub could hit capacity by mid-May, or the first week of June, at the latest.

There are other storage avenues for WTI — pipelines, railcars and even the government’s Strategic Petroleum Reserve, which according to Trump on Monday, could accommodate another 75 million barrels. But even adding all that up might leave existing U.S. capacity at only around 150 million to 200 million barrels, said Rystad Energy, a consultancy in Oslo, Norway.

After Cushing fills up by early June, there could be another six to eight weeks at most before all avenues shut off for a U.S. market where production is falling faster than elsewhere in the world — yet not fast enough to match the demand destruction from COVID-19.

As of last week, output had fallen by only 800,000 barrels per day from a record high production of 12.3 million bpd in March. The number of U.S. oil rigs actively drilling for crude had fallen by 35% in the same time, though that’s a lagged indicator that will only be telling in another five weeks or so.

All these have made WTI a sitting duck for the Saudis and Russians to take out in their quest for greater market share once the pandemic clears. The strategy is to play along with Trump by pledging to cut production but never doing enough to disrupt whatever markets and customers they have.

Riyadh is also deploying craftier tactics than the Kremlin, offering generous credit terms to refineries that bought oil from state-owned Saudi Aramco (SE:2222) and deep discounts to its Asian customers while appeasing Trump by raising prices on oil it ships to the United States.

Notwithstanding that, 20 Saudi tankers are expected to arrive at the U.S. ports of Louisiana and Texas in late May to dislodge a combined 40 million barrels of crude, according to sources at shipping and market intelligence firms Vortexa Ltd. and Kpler Inc. who spoke to the Wall Street Journal.

That Saudi oil will be added to a market practically swimming in U.S. crude. The arriving cargoes apparently have pre-determined buyers; while the Journal didn’t identify the customers, Motiva, the largest U.S. refiner in Port Arthur, Texas, with a capacity to process 630,000 barrels a day, is Saudi-owned.

“That’s the level of destruction they can do to shale drillers in an already glutted U.S. crude market.”

“After that, the Saudis are expected to continue with their steep discounts to Asian buyers and 90-day credit terms for other refiners under the extension of their scorched-earth policy,” Kilduff added, referring to the military strategy that aims to destroy anything that might be useful to the enemy when retreating from a position.

The irony is this is happening despite the so-called GLOPEC production cut deal between the Saudi-led OPEC cartel and an alliance of world producers, including Russia and the United States.

Trump himself brokered that pact to rescue the price of U.S. crude, which w thasen trading at under $20, by calling Crown Prince Mohammad, whom he described as his friend, and later President Putin. Trump and the Russian leader have spoken on the phone four times in April to discuss joint efforts against the coronavirus crisis.

For the record, the Saudis and Russians had three producer pacts between themselves for four years, before a disagreement in March triggered a price-and-production war, which when combined with COVID-19, led to a perfect storm for crude prices.

GLOPEC’s stated objective of removing 9.7 million barrels per day from the global market falls woefully short of demand loss estimated to be anywhere between 20 million and 30 million barrels daily over the next few months.

On top of loss of consumption comes the widely-expected specter of a U.S. recession—if not one that's global—by the second half of the year due to tens of millions of job losses suffered by Americans.

While the Russians have shown more adherence to the GLOPEC spirit by keeping their production plans under wraps, Dmitry Medvedev, deputy chairman of the security council at the Kremlin, said on Monday that Moscow was ready to sell oil on a "take or pay" basis — a measure aimed at protecting its market share in crude.

The 20 tanker loads of U.S.-bound Saudi oil was apparently consigned before the GLOPEC deal on April 20, making it hard for the Trump administration to object to the shipments.

Kevin Cramer, a senator in the president’s Republican party, had repeatedly lobbied him over the past couple of weeks to impose tariffs on all incoming oil — including from Saudi and Russia — to protect the U.S. industry. Trump, when asked by reporters on Monday, said he was “looking” into tariffs, without elaborating.

Little Way Out for U.S. Industry

But even such import duties might do little to save the shale industry.

“Hypothetically, any tariff on oil imports might turn Saudi tankers away from the U.S. but the oil will still be out there as floating storage on international waters and that doesn’t help the overall picture for oil,” said Tariq Zahir, managing member of the oil-focused Tyche Capital Advisors in New York.

“Cushing is definitely going to fill up before May. U.S. producers might start running out of places to store their oil by then and many might stop production and go bust,” Zahir said.

“Basically, all the Saudis and the Russians have done over the past few weeks is to do a song and dance in front of Trump. If demand comes back let's say in December, even January, the Saudis and Russians will be able to gain a tremendous market share by selling all the oil they have in storage and floating all over the place.”

He added that shale will make a comeback but it will look a lot different and weaker.

“There's going to be bankruptcies. There is going to be permanent damage that's done to fracking as well as offshore drilling and deep sea drilling. Because you have so much of a glut to settle, it’s going to take a year or more for that. There's going to be weaker players again and the big players that are in there, like Exxon (NYSE:XOM) and Chevron (NYSE:CVX), will be worried about their balance sheets being hurt by a prolonged period of $20 or so oil.”