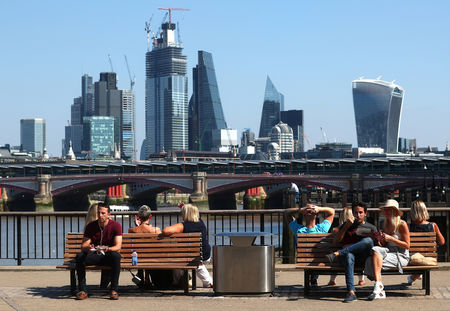 (Adds details, graphic, updates to close)
By Ambar Warrick
June 5 (Reuters) - London-listed shares ended at near
three-month highs on Friday, marking their third straight week
of gains as optimism around a post-coronavirus economic recovery
drove investors back to riskier assets.
The blue-chip FTSE 100 .FTSE and the mid-cap index .FTMC
both ended about 2.3% higher, posting their best week in nearly
two months.
An unexpected rise in U.S. non-farm payrolls during May also
spurred gains late in the session, with Wall Street indexes
rallying on the data. .N
EasyJet EZJ.L , cruise operator Carnival CCL.L and
British-Airways owner IAG ICAG.L surged as a report said https://www.ft.com/content/59fc4439-42b3-4de4-8276-5948d4514c4f
some European countries were keen to adopt transport corridors,
letting British holidaymakers visit Mediterranean resorts
without quarantining for 14 days on their return.
Carnival, which is slated to leave the FTSE 100 later in the
month, also topped the index for the day with a 19.8% gain.
"Investors continued to bid up airlines despite the sector
being in turmoil, betting that they will survive the crisis and
that their shares have been oversold," said Russ Mould,
investment director at AJ Bell.
British stocks have gained substantially over the past two
weeks, with the domestically-focussed mid-cap index rising
sharply after the UK government outlined plans to reopen several
retail spaces from June.