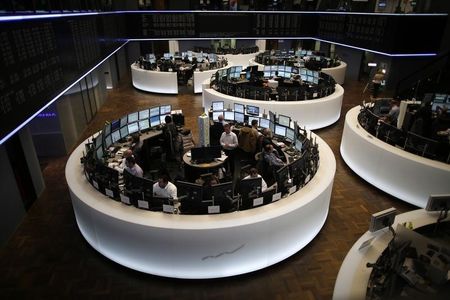 (Updates to market close)
By Sruthi Shankar
June 5 (Reuters) - European stocks racked up their best week
in two months on Friday, with investors scooping up battered
shares of banks, automakers and travel companies amid growing
signs that the pandemic-hit global economy is recovering.
The pan-European STOXX 600 .STOXX ended the day 2.5%
higher, getting an afternoon boost from data that showed U.S.
economy unexpectedly added jobs in May after suffering record
losses the prior month. Euro zone blue chip stocks .STOXXE jumped 3.8% and the
bloc's lenders .SX7E rallied 7.6% for their best weekly gain
since 2008's global financial crisis.
Risky assets across the world have been lifted this week as
economies continued to emerge from their lockdowns, while a
bigger-than-expected stimulus package from the European Central
Bank and hopes for European-Union wide fiscal action gave a
further boost to the continent's markets.
Growth-sensitive cyclical sectors that have suffered badly
during the coronavirus crisis, such as oil & gas .SXEP ,
automakers .SXAP and travel & leisure .SXTP , were up between
4.9% and 5.8%.
The auto-heavy Germany DAX .GDAXI is just 6.7% away from
hitting an all-time high.
"It only takes a small change in sentiment toward these
stocks – a glimmer of optimism that the virus is under control
or ever increasing stimulus – and investors will question
whether the reversal has begun," said Lewis Grant, a senior
portfolio manager at Federated Hermes.
"These rallies can become self-sustaining as more investors
rush in through fear of missing out," he added.
Analysts at Bank of America on Friday forecast European
stocks would rise another 10% by the end of September on
expectation of a pick-up in business activity. of a revival in tourist traffic helped British Airways
owner-IAG ICAG.L jump 13.6%, while shares in easyJet EZJ.L ,
Lufthansa LHAG.DE and Air France AIRF.PA gained between 5.5%
and 12.5%. .L
Airbus AIR.PA rose 12.5% after Australia's Qantas QAN.AX
announced plans to reactivate plans to order planes.
German fashion house Hugo Boss BOSSn.DE was up 11.4% after
it confirmed ongoing talks for a new chief executive officer
with Daniel Grieder, former head of Tommy Hilfiger Global & PVH
Europe. <^^^^^^^^^^^^^^^^^^^^^^^^^^^^^^^^^^^^^^^^^^^^^^^^^^^^^^^^^^^
European stocks recover nearly 2/3rd of virus-led losses https://tmsnrt.rs/2Y4mzYr
^^^^^^^^^^^^^^^^^^^^^^^^^^^^^^^^^^^^^^^^^^^^^^^^^^^^^^^^^^^>