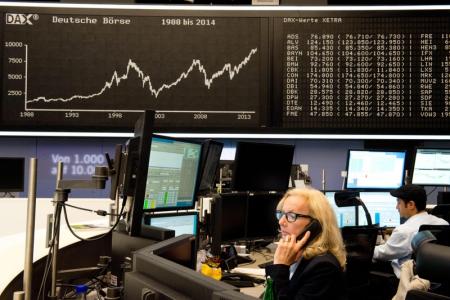 (Updates to market close)
By Sruthi Shankar
Nov 2 (Reuters) - European stocks started November trading
on a strong footing as a rebound in factory activity around the
world outweighed worries over a resurgence in COVID-19 cases
that is driving major economies in the continent back into a
lockdown.
The exporter-heavy German DAX index .GDAXI jumped 2.0% as
a survey showed factories in Europe's largest economy saw record
growth in new orders in October, with numbers improving in other
euro zone economies as well. Similar sets of data from China and the United States also
pointed to a strong rebound in manufacturing activity, boosting
cyclical sectors such as oil & gas .SXEP , banks .SX7P and
insurers .SXIP and chemical companies .SX4P in Europe.
Wall Street stocks also gained momentum as investors
prepared for the U.S. election, with Democratic challenger Joe
Biden leading over Republican President Donald Trump in national
opinion polls, but the race looks close in battleground states.
.N "Compared to the status quo if Trump were to secure a second
term, a Biden win and Democratic sweep could be perceived as
more beneficial to Europe," Barclays' European equity strategist
Emmanuel Cau said in a note.
"This is due to possibly reduced trade uncertainty, stronger
ties with the U.S. and greater stimulus lifting the reflation
trade."
Morning trading was hit by a tech glitch, with the
pan-European STOXX 600 .STOXX and STOXX 50 .STOXX50 indexes
failing to show opening prices due to "input data problems",
index operator Qontigo told its clients. The indexes were back online an hour after the open, with
the STOXX 600 rebounding 1.6% from a five-month low hit last
week.
London's domestically exposed midcap index .FTMC slipped
0.2% after Prime Minister Boris Johnson announced new
restrictions to curb the coronavirus across England that would
kick in after midnight on Thursday and last until Dec. 2.
.L
Europe's main regional indexes tumbled to multi-month lows
last week after Germany and France imposed nationwide lockdowns
and several other countries tightened coronavirus restrictions
to limit the spread of the virus. The latest round of curbs drove U.S. banks Goldman Sachs and
Morgan Stanley to cut Europe's fourth-quarter economic
forecasts, while BlackRock, the world's largest asset manager,
downgraded European equities to "neutral." Among individual stocks, Italy's biggest payments group Nexi
NEXII.MI slipped 2.6% after saying that it was in exclusive
merger talks with Denmark's Nets over a potential $8 billion
tie-up. British online supermarket and technology group Ocado
OCDO.L jumped 8.0% after saying that it would buy two robotics
companies and upgraded its full-year earnings outlook.