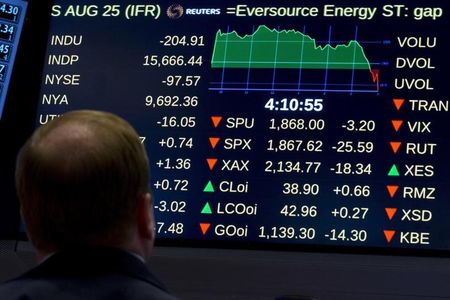 Investing.com – Stocks began the last month of 2019 with their second selloff in two sessions Monday as worries grew about U.S. trade fights with just about everyone and new reports that showed weakening manufacturing and construction data.

The trade fights included the threat of new tariffs on Chinese imports if a trade deal isn't struck by Dec. 15 and the possibility of new tariffs imposed on imports from the United Kingdom, France, Germany and Spain. The targets would include Airbus airliners. In addition, the Trump Administration added new tariffs on Brazilian and Argentinian steel.

Stocks opened higher but fell back fairly quickly on the announcement of tariffs in Brazilian and Argentinian steel.

The losses accelerated into the close with more tariff news. The declines at the close were the biggest for the S&P 500, Dow and Nasdaq since Oct. 8.

Apple (NASDAQ:AAPL) and Microsoft (NASDAQ:MSFT) were both lower, and streaming video platform Roku (NASDAQ:ROKU) fell sharply after a downgrade.

Energy and consumer staples were the only S&P 500 sectors showing gains.

Energy shares were higher as oil prices moved up. West Texas intermediate crude was up 79 cents to $55.96 a barrel. Brent crude, the global benchmark, finished ahead 43 cents to $60.92.

Real estate and technology were the weakest sectors.

Boeing (NYSE:BA) was the weakest Dow stock, down 3% on continued worries about when the 737 Max jet will be re-certified. The tariffs that may be imposed on European imports related to Boeing's complaints that the European Union illegally subsidized the development of Airbus. The World Trade Organization agreed with Boeing on Monday.

Boeing's loss contributed 75 points, or about 28%, to the Dow's overall decline of more than 268 points.

Meanwhile, reports suggested softening in manufacturing and construction. The Institute for Supply Management's widely watched manufacturing index fell for a fourth-straight month thanks in part to Boeing and pullbacks in oil and gas drilling.

The major averages had had record closes as late as Wednesday. So, the selling might have surprised many investors. The Dow fell 381 points on Friday and Monday.

But technical indicators have been signalling the U.S. stock market was getting well ahead of itself.

The U.S. economy is not showing signs of stress, the trade fights notwithstanding. Economists tracked by Investing.com see the U.S. unemployment rate holding at 3.6% for November when Labor Department issues its monthly jobs report on Friday. Nonfarm payrolls are expected to rise by 180,000, up from 128,000 in October.