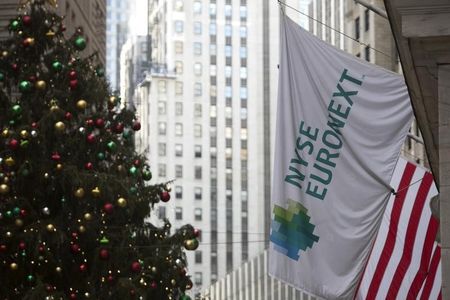 Investing.com - European stock markets headed higher Wednesday, helped by a strong close on Wall Street overnight, and some better-than-expected earnings and economic data both in Europe and stateside.

Leading the way in Europe has been the banking sector, helped by strong numbers from Santander (MC:SAN). The Spanish lender took a hit from payment protection claims in the U.K. but posted a higher quarterly net profit, boosted by a solid underlying performance in its main market Brazil.

Santander’s shares climbed 4%, pushing the banks index up 0.5%, the most among the main European subsectors.

Shares in Novartis AG (SIX:NOVN) rose 1.4% after the Swiss multinational pharmaceutical company guided for growth in both sales and profit in 2020, citing new medicines.

LVMH Moet Hennessy Louis Vuitton (PA:LVMH) also pushed higher, gaining 1.7% after recording strong revenue growth. The luxury sector has been hard hit by the outbreak of the coronavirus in China as well as the civil unrest in Hong Kong, with Asia one of the biggest markets.

On top of these solid earnings releases, economic data also surprised to the upside. French consumer confidence rose unexpectedly in January despite major strikes against pension reform, and there was a similar result in Germany. Meanwhile in the U.K., house prices rose 1.9% from a year earlier, the most since November 2018, according to Nationwide Building Society.

Overnight the death toll from the outbreak of the coronavirus in China reached 132 people, with close to 6,000 infected. Chinese authorities have closed transport systems in and out of Wuhan, where the virus was first noticed, and at least 10 other cities, effectively quarantining millions of people.

That said, the S&P 500 rose 1%, the NASDAQ Composite 1.4% and the Dow Jones Industrial Average gained 0.7%, rebounding from the worst daily decline in four months on Monday.

In the U.S., most eyes will be on Facebook (NASDAQ:FB). The online social media and social networking service is expected to post earnings growth of 6.2%. Goldman Sachs (NYSE:GS) will also be in the spotlight as the banking giant offers up its first-ever investor day, while Tesla (NASDAQ:TSLA) is also due to report earnings.

The Federal Reserve concludes its two-day policy setting meeting Wednesday, and will announce its decision in a policy statement at 2 PM ET (1900 GMT), with the chairman holding a press conference 30 minutes later.

The Fed is widely expected to keep interest rates steady following December forecasts that showed no change in 2020, and is expected to reinforce the signal that policy is on hold.