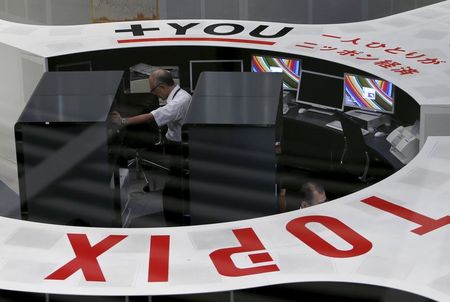 TOKYO, Sept 18 (Reuters) - Japanese shares inched higher on
Friday, helped by broad optimism surrounding Prime Minister
Yoshihide Suga's policies, but expensive valuations and a murky
earnings outlook made investors cautious ahead of a long
weekend.
Nikkei share average .N225 rose 0.18% to 23,360.30 and the
broader Topix .TOPX 0.49% to 1,646.42, with turnover hitting
the highest level in three weeks.
Both the indexes stopped well short of testing a near
seven-month peak scaled on Monday on hopes Suga will ensure
political stability and policy continuity. Suga, who has said he
would stick to his former boss' "Abenomics" economic growth
polices became Japan's prime minister on Wednesday. "The Nikkei is already trading at 23 times the earnings and
the Topix 24 times. Investors will hesitate to buy at current
levels," said Norihiro Fujito, chief investment strategist at
Mitsubishi UFJ Morgan Stanley Securities.
System integration and software companies jumped after
Nikkei business daily reported that Suga will work to get his
flagship new digital technology agency running by autumn 2021.
NTT Data 9613.T gained 7.6% while Fujitsu 6702.T rose
4.2% and NEC 6701.T added 4.0%. Smaller software firms also
rose in heavy volume with Shift 3697.T rising 2.9% and Change
3962.T up 4.4%.
Stocks in railway operators also rose, as investors bought
back after a recent sell-off, before the four-day weekend.
East Japan Railway 9020.T gained 2.4% and West Japan
Railway 9021.T was up 1.7%. But, both were still down about 6%
this week after they gave a guidance of record annual losses
earlier in the week. Japan's stock market will be closed on Monday and Tuesday
for a national holiday.
"The companies hit hard by the coronavirus are likely to
post underwhelming earnings as the railway companies have shown
this week," Fujito at Mitsubishi UFJ Morgan Stanley added.
Telecom shares came under fresh pressure after Suga
instructed a minister to consider lowering cell phone charges,
one of his long-time policy focus. NTT Docomo 9437.T , KDDI 9433.T and SoftBank 9434.T ,
fell 2.8%, 4.1% and 5.0% respectively.