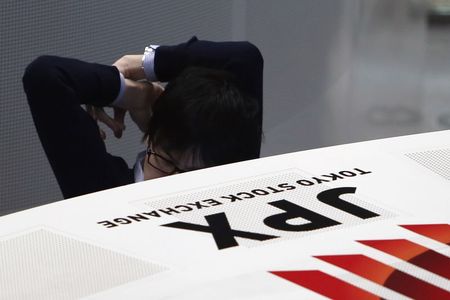 By Hideyuki Sano
TOKYO, Sept 18 (Reuters) - Japanese shares inched up on
Friday but hovered below their post-pandemic high touched
earlier this week, as investors grew cautious about expensive
valuations and a murky earnings outlook ahead of a long weekend.
At midday, Japan's Nikkei share average .N225 was up 0.03%
at 23,326.00 and the broader Topix .TOPX 0.22% to 1,642.01.
Both the indexes stopped well short of testing a near
seven-month peak scaled on Monday on hopes new Japanese Prime
Minister Yoshihide Suga will ensure political stability and
policy continuity.
Many of the day's top performers were recent laggards, such
as railway operators and carmakers, as investors bought them
back to close their positions ahead of a four-day weekend.
The market will be closed on Monday and Tuesday for a
national holiday.
East Japan Railway 9020.T gained 2.3% and West Japan
Railway 9021.T was up 1.9%. But, both were still down about 6%
this week after they gave a guidance of record annual losses
earlier in the week.
"The companies hit hard by the coronavirus are likely to
post underwhelming earnings as the railway companies have shown
this week," said Norihiro Fujito, chief investment strategist at
Mitsubishi UFJ Morgan Stanley Securities.
"The Nikkei is already trading at 23 times the earnings and
the Topix 24 times. Investors will hesitate to buy at current
levels."
Some battered cyclicals also gained, with Nissan Motor
7201.T rising 1.5% and Isuzu Motors 7202.T gaining 3.8%.
Buy-back in those shares, however, will have run its course
by this week, some analysts said, as margin sellers need to
close their positions within six months and Friday falls to six
months from the market's trough hit on March 17, the peak of
virus-led massive selling.
Telecom shares stayed under pressure as Suga has been
calling for lower mobile tariffs. NTT Docomo 9437.T , KDDI
9433.T and SoftBank 9434.T , fell 1.8%, 2.6% and 2.6%
respectively.