GLOBAL MARKETS-World stocks edge up, oil prices highest in over a month

GLOBAL MARKETS-World stocks edge up, oil prices highest in over a month 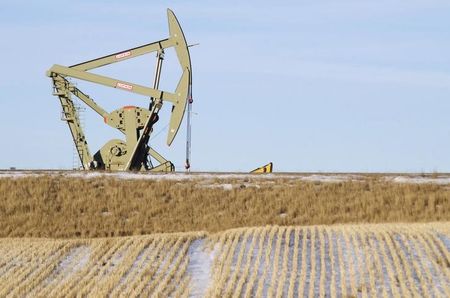 (Updates with market reaction to Huawei, sterling move)
By Dhara Ranasinghe
LONDON, May 15 (Reuters) - World stocks edged up on Friday
and oil prices rallied more than 2%, lifting sentiment after a
week pressured by deteriorating U.S.-China relations.
Oil prices rose to their highest levels in more than a month
LCOc1 CLc1 on signs that demand from China is picking up and
data showing China's industrial output in April expanded for the
first time this year. But news that the Trump administration has moved to block
shipments of semiconductors to Huawei Technologies HWT.UL from
global chipmakers could ramp up tensions with China tempered the
upbeat mood. U.S. stock market futures turned lower, pointing to a
negative open for Wall Street shares, while European markets
pared gains .FTSE .FCHI .GDAX .
After a bruising week, a broad measure of European stocks
.STOXX was set to end the week almost 4% lower - the biggest
weekly fall since the mid-March rout in global stocks as the
coronavirus crisis spread worldwide.
MSCI's world stock index .MIWD00000PUS , a touch firmer on
Friday, is down around 2.7% this week and also set for its
biggest weekly drop since March.
Analysts said this week's decline, while a natural
correction after a rally since mid-March, also reflected growing
concerns about rising U.S.-China tensions.
U.S. President Donald Trump on Thursday signaled a further
deterioration in his relationship with China over the novel
coronavirus, saying he had no interest in speaking to President
Xi Jinping and suggesting he could even cut ties with Beijing.

"There is no doubt that the optics around the
trade/diplomacy backdrop have worsened in the last week and this
has had a negative influence," Chris Bailey, European strategist
at Raymond James in London, said.
"There has also been a subtle change in the perceptions of
market participants, for example the negative interest rate
debate getting a very good airing in the United States."
U.S. Federal Reserve Chair Jerome Powell has brushed off the
notion that the Fed could push rates below 0% after futures tied
to Fed interest rate policy expectations began pricing a small
chance of sub-zero U.S. rates within the next year. Two-year U.S. Treasury yields are trading at just 0.14%
US2YT=RR , while short-dated bond yields in Britain have dipped
back below 0% this week GB2YT=RR .
Faced with an exceptional hit from the coronavirus crisis,
central bankers are under intense pressure to do more to shore
up battered economies.
The German economy contracted by 2.2% in the first quarter,
its steepest three-month slump since the 2009 financial crisis
as shops and factories were shut in March to contain the spread
of the coronavirus, preliminary data showed on
Friday. "While the drop is smaller than during the worst quarter of
the financial crisis (Q1 2009), the most serious damage of
COVID-19 is yet to come," Florian Hense, an economist at
Berenberg, said.
On the currency markets, the euro was marginally softer at
around $1.0798 EUR=EBS , while the dollar dipped 0.2% to 107.02
yen JPY=EBS .
Britain's currency came under further pressure after the
European Union's Brexit negotiator Michel Barnier said that the
third round of talks with Britain on a new partnership was
"disappointing". Sterling was last down 0.6% at $1.2156 GBP=D3 and almost
0.5% lower versus the euros EURGBP=D3 .
The Turkish lira TRY= was back below 7 per dollar and on
course for its best week since February as it recovers from
all-time lows.
Reuters reported that Turkey has reached out to various
countries for swap lines as it scrambles to try to shore up
financing.