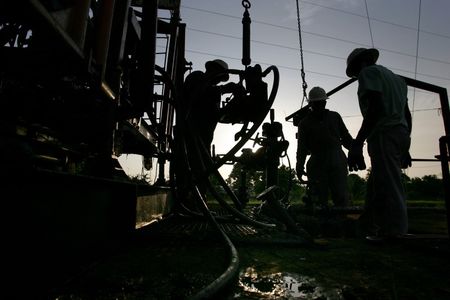 By Simon Jessop and Wayne Cole
LONDON/SYDNEY, Nov 19 (Reuters) - World stocks eased for the
third day in a row and oil fell on Thursday tracking overnight
weakness in Asia and Wall Street as widening COVID-19
restrictions weighed on market sentiment.
Positive news about potential vaccines had helped push the
MSCI World Index .MIWD00000PUS to a record high earlier in the
week, only to see investors pull back as a host of countries
announced record infection rates and tougher lockdowns.
At 0844 GMT, the broad gauge of global equities was trading
down 0.3% while Europe's major indexes .STOXX .STOXX50E
.FTSE were down around 0.7%. Oil prices LCOc1 CLc1 also
eased as virus restrictions crimped demand expectations.
The weaker sentiment was triggered by a late U.S. sell-off
overnight that had seen the S&P 500 .SPX close down 1.1%;
weighed by news COVID-19 deaths in the world's biggest economy
had passed 250,000, underpinning a host of lockdowns.
Similarly sombre news in Japan, where a record number of
cases and a rise in Tokyo's pandemic alert level sent the Nikkei
.N225 down 0.4%. MSCI's broadest index of Asia-Pacific shares
outside Japan .MIAPJ0000PUS fell 0.5%. "The biggest question in the markets right now is whether
the headlines of renewed school closures, lockdowns and social
restrictions is enough to derail vaccine positives and the fact
that COVID survival rates are climbing along with the
hospitalisation and infection rates," said a London-based
trader.
The positive vaccine news had continued yesterday after
Pfizer PFE.N said its COVID-19 vaccine was 95% effective and
it would apply for emergency U.S. authorization within days,
following a similar recent report from Moderna MRNA.O .
Looking ahead, Wall Street futures ESc1 point to a steady
open, with all eyes on the Federal Reserve for further signs it
could step in with fresh monetary stimulus - something two
officials nodded to on Wednesday. Investors will also await U.S. jobs data at 1330 GMT.
Against a basket of currencies the dollar was last at 92.575
=USD , marginally in the black but just off its recent low of
92.129. The euro, meanwhile, was down 0.1% and just short of
the recent peak of $1.1919.
"The vaccines news are a positive medium-term impulse for
the global economic outlook and investors are trying to weigh
that against the prospect of an imminent stalling of the
European and U.S. recovery amid the prospect of extensions of
current lockdown measures," said Rodrigo Catril, a senior FX
strategist at NAB.
Sterling GBP=D3 , however, was weaker still, down 0.5%
after a report Europe's leaders would demand the European
Commission publish no-deal plans as the deadline for talks over
a trade deal go down to the wire. Despite the equity market caution, gold traders continued to
take a longer-term view, betting the COVID-19 vaccines would
translate into a quicker economic recovery, sending the yellow
metal to a one-week low XAU= .
Bitcoin BTC=BTSP , sometimes regarded as a safe haven or at
least a hedge against inflation, also pulled back and last stood
at $17,500.