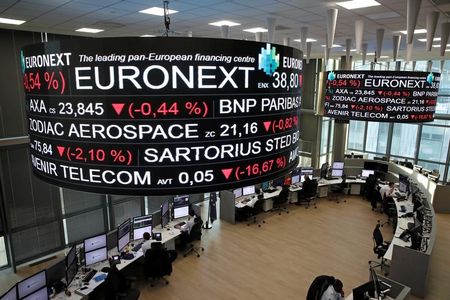 By Carolyn Cohn
LONDON, Dec 2 (Reuters) - World stocks hovered near record
highs on Wednesday on hopes for a coronavirus vaccine and
additional U.S. economic stimulus, though enthusiasm for
riskier assets left the dollar stuck at a 2-1/2 year low.
Britain on Wednesday became the first country in the world
to approve the Pfizer-BioNTech COVID-19 vaccine for use, saying
it would start rolling it out early next week. The two drug firms PFE.N BNTX.O and competitor Moderna
MRNA.O have also sought emergency use approval from European
regulators this week. Top U.S. health officials have announced plans to start
vaccinating Americans as early as mid-December once regulatory
approvals are in place. Nationwide deaths hit 2,295 on Monday
the highest toll in six months.
"Approval of a highly effective vaccine may mark the
beginning of the end to the COVID-19 economic turmoil and the
beginning of a new bull market for equities," said Mike Bell,
global market strategist at J.P. Morgan Asset Management.
"The scientists have come to the rescue and delivered what
investors were hoping for Christmas."
Despite the positive news, European stocks struggled to add
to their recent surge in early trading but MSCI's gauge of
stocks across the globe .MIWD00000PUS inched up 0.1% to keep
it near an all-time high.
The dollar was stuck at 2-1/2 year lows against the euro
EUR= and an index of major currencies =USD as investors
sought out the higher risk currencies that had fallen during the
earlier stages of the pandemic.
Yields on euro zone government bonds edged up to their
highest in three weeks at -0.51% EUR10YT=RR .
Pfizer and BioNTech said their vaccine could be launched in
the European Union as early as this month, though a European
regulator clouded the schedule when it said it would complete
its review of their vaccine by Dec. 29. Deutsche Bank analysts said the early approval and roll-out
of the vaccine in Britain "raises the prospect that life could
return closer to normal early next year".
Shares in BioNTech 22UAy.F surged by more than 8% before
trimming gains, though European shares .STOXX slipped overall
by 0.3%, shuffling below recent nine-month highs.

HOT OIL
Markets were also hoping for more fiscal relief. Top U.S.
Senate Republican Mitch McConnell said on Tuesday that Congress
should include new coronavirus stimulus in a $1.4 trillion
spending bill aimed at heading off a government shutdown in the
midst of the pandemic. U.S. President-elect Joe Biden told the New York Times his
priority is getting a generous aid package through Congress even
before he takes office in January. U.S. stock futures EScv1 declined 0.23% following a record
closing high for Wall Street shares.
The pound was under some pressure, however, as a senior EU
diplomat said UK's post-Brexit trade deal with the European
Union "still hangs in balance". Sterling fell more than 0.5% to $1.3354 GBP=D3 . UK
blue-chip stocks .FTSE were steady.
In Asia, shares in China .CSI300 recovered from early
losses and rose 0.12%.
Tokyo stocks .N225 were little changed after setting a new
29-year high. Softbank Group shares 9984.T fell 0.66% after
Bloomberg News said the tech investor is winding down its
options trades on companies including Amazon.com Inc AMZN.O
and Facebook Inc FB.O .
Oil prices were also lifted by the vaccine optimism,
reversing earlier losses made after OPEC and its allies left
markets in limbo by postponing a formal meeting to decide
whether to lift output in January.
Brent crude futures LCOc1 rose 0.15% to $47.49 per barrel,
while U.S. crude CLc1 was down 0.09% at $44.51 per barrel. Oil
has raced up nearly 30% over the last month.