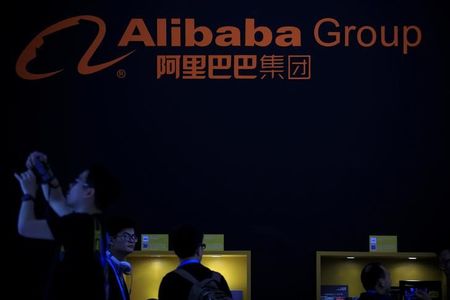 By Stanley White and John McCrank
TOKYO/NEW YORK, Dec 24 (Reuters) - Asian shares and the
British pound rose on Thursday ahead of the Christmas break, as
Britain and the European Union closed in on a free-trade deal
and investors placed bets on global economic recovery prospects.
MSCI's broadest index of Asia-Pacific shares outside Japan
.MIAPJ0000PUS rose 0.45%. Australian stocks .AXJO ended
0.33% higher, while Tokyo shares .N225 rose 0.45%.
Chinese stocks .CSI300 fell 0.28%.
Alibaba Group Holding Ltd 9988.HK shares slumped 8.13%,
its biggest daily drop in six weeks, after China's market
regulator said it will investigate the tech giant for suspected
monopolistic behaviour. U.S. stock futures EScv1 edged up by 0.16%.
FTSE futures FFIc1 were up 0.56%. Euro Stoxx 50 futures
STXEc1 were up 1.15%, while German DAX futures FDXc1 rose
1.28%, pointing to a bright start to the European session.
Investors cheered news that Britain and the European Union
were on the cusp of striking a narrow trade deal on Thursday
that would help them avoid a turbulent economic rupture on New
Year's Day. Hopes for more fiscal spending and expectations that
coronavirus vaccines will become more available next year also
supported global equities.
"A pro-risk and weak dollar theme dominated markets on
optimism regarding vaccines, U.S. and UK fiscal stimulus, and
Brexit, with hope an agreement on the latter can be reached
before Christmas," ANZ Bank analysts wrote in a research memo.
The potential for a Brexit deal boosted sterling GBP=D3 ,
which rose 0.47% to $1.3558. The pound edged up to 90.05 pence
per euro EURGBP=D3 .
The pound also drew support after France lifted its ban on
freight coming from Britain, which it had enacted in response to
a more contagious coronavirus variant in Britain. MSCI's gauge of global stocks .MIWD00000PUS was up 0.12%,
but moves were subdued in thin holiday trading.
Alibaba, co-founded by Chinese billionaire Jack Ma, was the
stock to watch in Asia on Thursday as Chinese authorities
stepped up their campaign against big technology companies.
Separately, Ant Group, the mobile payments and consumer
credit arm of Ma's tech empire, said it will comply with all
regulatory requirements after China's financial watchdogs said
they will conduct regulatory talks with it in coming days.
Last month, China halted Ant Group's $37 billion
dual-listing initial public offering, crushing what would have
been the world's largest stock market debut.
Wall Street ended mostly higher on Wednesday, with the Dow
Jones Industrial Average .DJI closing up 0.38% and the S&P 500
.SPX edging 0.07% higher. The Nasdaq Composite .IXIC
declined 0.29%. .N
A raft of mixed U.S. economic data showed lower jobless
claims and an uptick in new orders for durable goods, but also a
pullback in consumer spending, falling personal income and
fading sentiment as the holiday shopping season nears its end
amid a resurgent pandemic. Investors largely shrugged off comments by U.S. President
Donald Trump that a nearly $900 billion stimulus bill, agreed
upon after months of wrangling in Congress, was "a disgrace"
that he might not sign. "Risk-on sentiment is guiding markets so far today and it
appears to be weighted more toward possible optimism toward a
Brexit deal and the cherry-picked parts of U.S. releases, rather
than Trump's reckless antics over signing the stimulus and
funding bill," said Derek Holt, head of capital markets
Economics at Scotiabank.
Brent crude futures LCOc1 rose 38 cents to $51.58 a barrel
by 0530 GMT, while U.S. West Texas Intermediate crude CLc1
increased 31 cents to $48.43, buoyed by a drawdown in U.S.
stockpiles and a potential Brexit trade deal. O/R