GLOBAL MARKETS-Stocks and oil fall with eyes on U.S. stimulus

GLOBAL MARKETS-Stocks and oil fall with eyes on U.S. stimulus 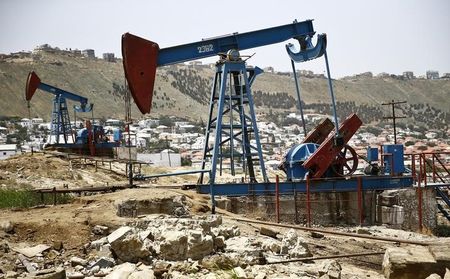 (Updates prices)
By Rodrigo Campos
NEW YORK, Aug 13 (Reuters) - Stocks ticked down from 6-month
highs on Thursday on concern over a stalled U.S. economic relief
deal, while oil fell and the euro edged up against the U.S.
dollar.
Treasury yields hit multi-week highs after record supply at
a 30-year bond auction drew poor demand. Initial claims for U.S. state unemployment benefits dipped
below 1 million last week for the first time since mid-March,
but the expiration at the end of July of a $600 weekly jobless
supplement likely contributed to the decline.
Data showed the world's largest economy regained only 9.3
million of the 22 million jobs lost between February and April.
But Wall Street has recovered most equity market losses and the
benchmark S&P 500 was within a few points of a record high.
"Our take on a new high, if it happens, is that it's another
reminder to investors how disconnected the stock market and the
economy have been this year. Stocks have soared but the economy
– it's improved, yes – but a million initial claims is still not
good," said Ryan Detrick, senior market strategist at LPL
Financial in Charlotte, North Carolina.
The Dow Jones Industrial Average .DJI fell 105.46 points,
or 0.38%, to 27,871.38, the S&P 500 .SPX lost 8.91 points, or
0.26%, to 3,371.44 and the Nasdaq Composite .IXIC added 28.28
points, or 0.26%, to 11,040.52.
The STOXX 600 .STOXX suffered its first fall in five days
after Washington said it would maintain 15% tariffs on planes
and 25% tariffs on other European goods. .EU
The pan-European index .STOXX lost 0.63% and MSCI's gauge
of stocks across the globe .MIWD00000PUS shed 0.14%.
The 5-month global rally has caused MSCI's world index
.MIWD00000PUS to rise 50% from its March lows and reach within
2% of an all-time high.
In the currency and bond markets, faltering hopes for a
compromise between Republicans and Democrats over additional
stimulus for the U.S. economy dragged the dollar index =USD
down. /FRX
The greenback =USD fell 0.049%, with the euro EUR= up
0.19% to $1.1804.
The Japanese yen weakened 0.03% versus the dollar to 106.95
per dollar, while Sterling GBP= was last trading at $1.3049,
up 0.13% on the day.
A sell-off in benchmark government bond markets also eased,
as investors digested the biggest-ever 10-year U.S. debt sale,
and some surprisingly robust U.S. inflation figures.
U.S. Treasury yields rose to multi-week highs after the
Treasury auction of a record amount of 30-year bonds.
Benchmark 10-year notes US10YT=RR last fell 8/32 in price
to yield 0.7126%, from 0.686% late on Wednesday.
The 30-year bond US30YT=RR last fell 44/32 in price to
yield 1.4224%, from 1.365%.
In Asia, Japanese stocks were the main mover, soaring 1.8%
to a six-month peak .N225 on gains from chip firms. .T
MSCI's broadest index of Asia-Pacific shares outside Japan
.MIAPJ0000PUS closed 0.05% rose 0.11. Emerging market stocks
rose 0.17%.
Oil prices eased after the International Energy Agency
lowered its 2020 oil demand forecast following unprecedented
travel restrictions, but a weak dollar limited losses. Traders
kept an eye on U.S. stimulus headlines.
"Overall, neither yesterday's OPEC or today's IEA release
appeared to have much effect on an oil market that is still
primarily focused on the ongoing expansion in risk appetite that
remains undeterred by lack of progress in formulating a viable
U.S. stimulus deal," said Jim Ritterbusch of Ritterbusch and
Associates.
U.S. crude CLc1 recently fell 0.75% to $42.35 per barrel
and Brent LCOc1 was at $45.07, down 0.79% on the day.
Spot gold XAU= added 1.7% to $1,951.06 an ounce. Silver
XAG= gained 6.56% to $27.24.