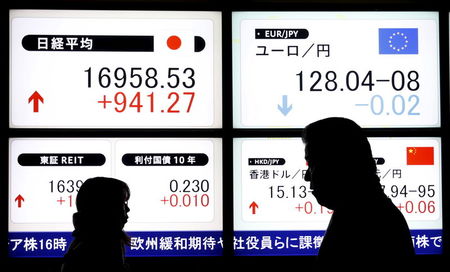 By Stanley White and Koh Gui Qing
TOKYO/NEW YORK, Dec 29 (Reuters) - Asian shares rose on
Tuesday, with Japanese stocks hitting a 30-year high, as
investor risk was encouraged by a Brexit trade deal and hopes a
long-awaited U.S. pandemic relief package will be expanded.
MSCI's broadest index of Asia-Pacific shares outside Japan
.MIAPJ0000PUS rose 0.45%. Australian stocks .AXJO ended up
0.53%. Japan's Nikkei .N225 surged by 2.4% to its highest
since August 1990. Shares in China .CSI300 bucked the trend,
falling 0.32% on profit taking.
Futures for the S&P 500 ESc1 added 0.4%.
Euro Stoxx 50 futures STXEc1 were up 0.42%, German DAX
futures FDXc1 rose 0.53%, and FTSE futures FFIc1 gained
1.12%, pointing to a bright start to European trade.
The dollar nursed losses against major currencies and
Treasury yields rose after U.S. President Donald Trump's
approval of a $2.3 trillion stimulus package to counter the
effects of the coronavirus pandemic. While the package still has to pass the Senate, Trump's
approval on Sunday sent shares on Wall Street to record highs on
Monday amid increased optimism about an economic recovery. .N
"With the Brexit ... and the U.S. stimulus deal now in the
rear-view mirror, there is a sense of relief that we have
avoided the respective worst-case scenarios," said Stephen
Innes, chief global market strategist at Axi, a broker.
Britain clinched a narrow Brexit trade deal with the EU on
Thursday, just seven days before it exits one of the world's
biggest trading blocs.
Firmer demand for riskier assets kept the U.S. dollar, which
is often seen as a "safe-haven" asset, on the back foot. It was
down 0.02% against a basket of major currencies.
Shorting the dollar has been a popular trade recently and
calculations by Reuters based on data released by the Commodity
Futures Trading Commission on Monday suggested that trend could
endure. Short positions on the dollar swelled in the week ended
Dec. 21 to $26.6 billion, the highest in three months.
The dollar index =USD against a basket of six major
currencies fell to 90.137, not far from the lowest in more than
two years.
Sterling GBP=D3 edged up to $1.3483 following the
confirmation last week of a trade UK-EU trade deal that was
widely expected.
A sluggish dollar bolstered gold prices XAU= , which rose
0.33% to $1,877.56 an ounce. GOL/
Jack Ma's Alibaba Group Holding Ltd 9988.HK rose 6.4%,
snapping six straight sessions of declines. Analysts said those
gains could be shortlived given Chinese regulators have called
for a shakeup of Ant Group, Alibaba's mobile payment and
consumer finance arm.
Analysts also cited concerns that other large Chinese tech
companies could face more government scrutiny, which could curb
investment in the sector. Oil prices recovered after falling overnight because of
concerns about increased supply and lower demand amid fresh
COVID-19 travel restrictions around the world. O/R
Brent crude LCOc1 rose 0.45% to $51.09 per barrel. U.S.
crude CLc1 was up 0.48% at $47.85 a barrel.
More U.S. fiscal stimulus has also eased concerns about the
threat posed by new variants of the coronavirus identified in
Britain and South Africa.
The yield on benchmark 10-year Treasury notes US10YT=RR
rose to 0.9381%, but the two-year US2YT=RR eased to 0.1270%.