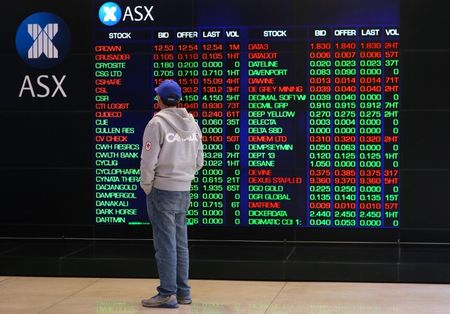 By Stanley White
TOKYO, Jan 5 (Reuters) - Asian shares edged lower on Tuesday
amid uncertainty about Senate runoffs in Georgia, which could
have a big impact on incoming U.S. President Joe Biden's ability
to pursue his preferred economic policies.
MSCI's broadest index of Asia-Pacific shares outside Japan
.MIAPJ0000PUS fell 0.05%, pulling back from a record high.
Australian stocks .AXJO fell 0.26%.
Chinese shares .CSI300 erased early losses and rose 0.52%.
In Hong Kong, China Mobile 0941.HK , China Unicom 0762.HK ,
and China Telecom 0728.HK rallied by more than 6% after the
New York Stock Exchange abandoned plans to delist the companies'
shares from its bourse. Japanese shares .N225 lost 0.34% after a spokesman said
the government will reach a decision on a state of emergency for
Tokyo and surrounding cities on Thursday to curb coronavirus
infections. U.S. S&P 500 stock futures ESc1 edged up 0.03%. Euro Stoxx
50 futures STXEc1 were down 0.39%. German DAX futures FDXc1
fell 0.34%, and FTSE futures FFIc1 fell 0.26%.
Oil futures were little changed in cautious trade as
investors awaited a meeting later on Tuesday where major crude
producers are set to decide output levels for February.
In the United States, control of the Senate is at stake with
Tuesday's dual runoff elections in Georgia. A Democratic victory in both races could tip control of the
Senate away from Republicans, but both contests are very tight
and the results may not be immediately known, which could lead
to a repeat of the chaotic vote re-counts after the U.S.
presidential election last year.
"2021 starts with a bang with pivotal political and economic
news for markets to digest. The undisputed highlight will be the
result of the Senate seat run-off elections in Georgia," James
Knightley, chief international economist at ING, wrote in a
research memo.
"If the Democrats win both seats this should lead to the
most substantial 2021 fiscal stimulus. Nonetheless, it could be
the excuse for a near-term consolidation in risk markets after a
strong post-election rally."
Uncertainty about the Georgia vote and worries about rising
coronavirus infections sent Wall Street sharply lower on Monday.
The Dow Jones Industrial Average .DJI fell 1.27%, the S&P
500 .SPX lost 1.49%, while the tech-heavy Nasdaq .IXIC
dropped by 1.48%.
Outgoing Republican President Donald Trump's call to
pressure Georgia's top election official to "find" votes to
overturn his loss to President-elect Biden in the state has also
unnerved some investors. The House and the Senate are scheduled to certify Biden's
election win on Wednesday, but some Republicans have pledged to
vote against this and thousands of Trump supporters are expected
to converge on the capital in protest. The MSCI's broadest gauge of global stocks .MIWD00000PUS
was unchanged, sitting just below a record reached in the
previous session.
Increased risk aversion helped the dollar index =USD
rebound from a 2 1/2-year against a basket of major currencies,
but moves were subdued at the start of the year.
The British pound GBP=D3 bought $1.3591, recovering some
of Monday's losses after Prime Minister Boris Johnson ordered a
lockdown to try and slow a fast-spreading coronavirus variant.
U.S. crude futures CLc1 were little changed at $47.61 a
barrel, while Brent futures LCOc1 edged down by 0.1% to $51.04
per barrel. Major oil producers will meet later on Tuesday to
decide on output levels for February after talks broke down the
previous day. Gold was slightly lower. Spot gold XAU= fell 0.16% to
$1,939.25 per ounce. GOL/