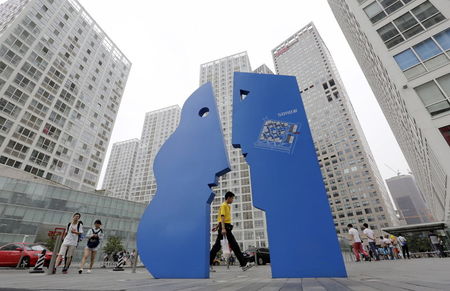 By Lawrence Delevingne
BOSTON, Aug 13 (Reuters) - Asian shares were set for a
largely flat start on Friday as markets weighed a pause in Wall
Street's multi-month stock rebound and awaited the release of
Chinese economic data later in the session.
Australian S&P/ASX 200 futures YAPcm1 were down 0.05%,
while Japan's Nikkei 225 futures NKc1 were up 0.06% after the
Nikkei 225 index .N225 closed up 1.78% at 23,249.61​​​​ on
Thursday. The futures contract is down 0.11% from that close​.
Hong Kong's Hang Seng index futures .HSI .HSIc1 were down
0.13%.
The S&P 500 .SPX ended slightly lower on Thursday after
briefly trading above its record closing high level for a second
day, and the Dow Jones Industrial Average .DJI also dipped in
the wake of a disappointing forecast from Cisco Systems Inc
CSCO.O . The Nasdaq Composite .IXIC , boosted by Apple Inc
AAPL.O , nudged higher. Wall Street's hesitation came as U.S. lawmakers continued to
battle over a new economic stimulus package and after a report
from the U.S. Labor Department showed the number of Americans
seeking unemployment benefits dropped below one million last
week for the first time since the start of the COVID-19 pandemic
- not enough to change economists' views that the jobs market
recovery was faltering. "Many say that the best treatment for altitude sickness is
to stop and rest where you are," Rodrigo Catril, Senior FX
Strategist at National Australia Bank in Sydney, wrote in a note
about the slight pullback in U.S. stocks and government bonds.
E-mini futures for the S&P 500 EScv1 rose 0.13%. MSCI's
gauge of stocks across the globe .MIWD00000PUS shed 0.04%.
The dollar index =USD fell 0.141%. The Japanese yen
weakened 0.03% versus the greenback JPY= at 106.96 per dollar;
The Australian dollar AUD= rose 0.03% versus the greenback at
$0.715 and the offshore Chinese yuan CNH= weakened to 6.9485
per dollar.
Joseph Capurso, Head of International Economics at
Commonwealth Bank of Australia in Sydney, said economic data
expected later on Friday from China would drive trading in the
Australian dollar and Chinese currency.
"We anticipate July retail sales, industrial production and
fixed asset investment will all point to a continued robust
recovery in China," he wrote. "The China-led, commodity-heavy,
recovery in the global economy supports commodity currencies
such as AUD."
Benchmark U.S. Treasury yields surged to seven-week highs on
Thursday after the Treasury sold a record amount of 30-year
bonds to weak demand. Ten-year yields US10YT=RR were last at
0.718%, after earlier reaching 0.727%, the highest since June
24. They are up from 0.504% last Thursday, which was the lowest
since March 9. Oil prices eased on Thursday after a weaker demand forecast,
but the weak dollar limited losses as traders kept an eye on
U.S. stimulus headlines. U.S. crude CLc1 was up 0.24% to
$42.34 per barrel while Brent LCOc1 settled Thursday's session
at $44.96.
Spot gold XAU= added 0.3% to $1,958.07 an ounce.