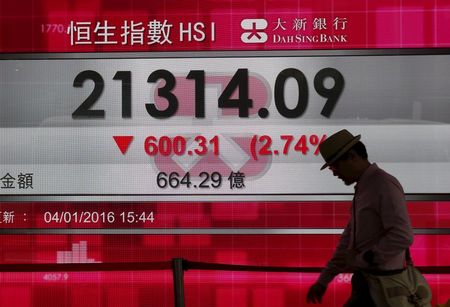 By Hideyuki Sano
TOKYO, Dec 30 (Reuters) - Asian shares hit a record high on
Wednesday with investors betting on a strong economic recovery
next year, as there is little sign policymakers wind back
massive stimulus efforts aimed at staving off
coronavirus-fuelled downturns.
MSCI's gauge of Asia-Pacific shares excluding Japan
.MIAPJ0000PUS rose 1.2% to hit a record high, led by gains in
Chinese shares and bringing its gains so far this year to 18.9%.
Japan's Nikkei share average .N225 lost 0.45% on its last
trading day of 2020 after jumping to a 30-year high on Tuesday.
For the year, it was up 16.0%.
European shares are seen dipping slightly with Euro Stoxx 50
futures STXEc1 down 0.2% and FTSE futures FFIc1 losing 0.1%.
Convictions that global monetary authorities will continue
to pump liquidity into the banking system to support the
pandemic-stricken economy underpin risk assets.
"We think continued monetary and fiscal policy support means
investors should take risk. Stocks will do better than bonds.
Within bonds, corporate bonds should beat government bonds,"
said Hiroshi Yokotani, head of Asia-Pacific fixed-income
business at State Street Global Advisors.
E-Mini futures for the S&P 500 ESc1 rose 0.41%, erasing
losses made in the previous day after U.S. Senate Majority
Leader Mitch McConnell put off a vote on President Donald
Trump's call to boost COVID-19 relief checks. Although many Republican Senators remain adamantly opposed,
worried about the cost to taxpayers, support is growing among
them, including two from Georgia, who are running in the crucial
races that will determine who will control the Senate.

END OF ILLUSION?
Even an alarming spread of a COVID-19 variant in many
countries has so far done little to curb investors' appetite.
The United States has detected its first-known case of the
highly infectious coronavirus strain already spotted in Britain
and South Africa. But a crack may be appearing in market euphoria, said Yasuo
Sakuma, chief investment officer at Libra Investments, noting
some red-hot U.S. small cap shares, such as biotech and
software-as-a-service stocks, have failed to catch up with a
broader rally.
"There are lots of loss-making companies that are valued at
more than $10 billion. I think the time is up for the illusion
that they can make money by doing business only in a virtual
world. Soon these firms could find themselves no longer able to
attract money just because they have a nice business idea or
some nice test products." he said.
The Russell 2000 .RUT , a U.S. stock index that includes
small cap shares, fell 1.85% on Tuesday.
In the currency market, the dollar dropped on the first day
of trading for settlement in 2021 as traders started to dump the
safe-haven U.S. currency anew.
The euro EUR= rose 0.3% to $1.2295, a level last seen in
April 2018.
"The start of COVID-19 immunization campaigns in several
countries as well as additional U.S. fiscal support reduce
downside risk to the global economy and bode well for general
financial market sentiment," analysts at Commonwealth Bank of
Australia said in a note.
The Australian dollar AUD=D3 rose 0.6% to $0.7663, hitting
a 2 1/2-year high, while sterling GBP=D3 traded up 0.30% at
$1.3556.
The Japanese yen JPY= also gained 0.15% to 103.36 per
dollar JPY= .
The U.S. dollar index =USD losing 0.25% to stand at
89.798, having hit a 2 1/2-year low of 89.711 at one point.
A sluggish dollar supported gold XAU= , with bullion prices
up 0.14% at $1,880.70 an ounce. GOL/
Oil prices extended gains after a rebound overnight as
investors hoped that an expanded U.S. pandemic aid stimulus
would spur fuel demand and stoke economic growth.
U.S. West Texas Intermediate crude CLc1 futures were up
0.21% at $48.10 a barrel. O/R
Treasuries were little changed after trading sideways
overnight in thin trade amid the year-end holidays. U.S.
two-year yields US2YT=RR were steady at 0.127% and benchmark
10-year yields stood at 0.9364%. US/