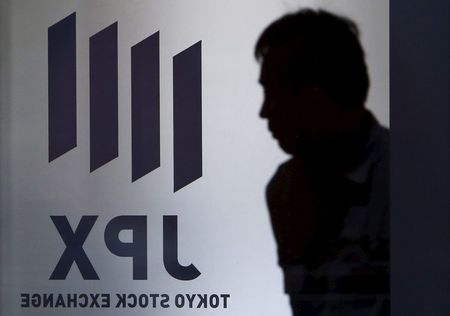 By Hideyuki Sano
TOKYO, Dec 30 (Reuters) - Asian shares hit a record high on
Wednesday as investors bet on a strong economic recovery next
year, as there is little sign policymakers wind back massive
stimulus efforts aimed at staving off coronavirus-fuelled
downturns.
MSCI's gauge of Asia-Pacific shares excluding Japan
.MIAPJ0000PUS rose 0.6% to hit a record high, led by gains in
Chinese shares, bringing its gains so far this year to 18.2%.
Japan's Nikkei share average .N225 lost 0.58% on its last
trading day of 2020 after jumping to a 30-year high on Tuesday.
For the year, it was up 15.8%.
"Investors stick to a bullish view overall and some are
starting to bet further on rise in equity prices," said Masanari
Takada, cross-asset strategist at Nomura Securities.
Convictions that global monetary authorities will continue
to pump liquidity into the banking system to support the
pandemic-stricken economy underpin risk assets.
"We think continued monetary and fiscal policy support means
investors should take risk. Stocks will do better than bonds.
Within bonds, corporate bonds should beat government bonds,"
said Hiroshi Yokotani, head of Asia-Pacific fixed-income
business at State Street Global Advisors.
E-Mini futures for the S&P 500 ESc1 edged up 0.13%, paring
much of the losses made in the previous day after U.S. Senate
Majority Leader Mitch McConnell put off a vote on President
Donald Trump's call to boost COVID-19 relief checks.
At least five Republicans have so far voiced support for the
higher payments, which would require 60 votes, including the
backing of a dozen Republicans.
In the currency market, the dollar dropped on the first day
of trading for settlement in 2021 as traders started to dump the
safe-haven U.S. currency anew.
The euro EUR=EBS rose 0.3% to $1.2295, after climbing
overnight to a high of $1.2275, a level last seen in April 2018.
"The start of COVID-19 immunization campaigns in several
countries as well as additional U.S. fiscal support reduce
downside risk to the global economy and bode well for general
financial market sentiment," analysts at Commonwealth Bank of
Australia said in a note.
The Australian dollar AUD=D3 rose 0.4% to $0.7637, just
shy of a 2-1/2-year high of $0.7639, while sterling GBP=D3
traded up 0.25% at $1.3500.
The Japanese yen JPY= also gained 0.15% to 103.36 per
dollar JPY= .
The U.S. dollar was listless against a basket of major
currencies =USD , losing 0.26% to stand at 89.769, within
spitting distance from a 2-1/2-year low of 89.723. USD/
A sluggish dollar supported gold XAU= , with bullion prices
up 0.26% at $1,882.80 an ounce. GOL/
Oil prices extended gains after a rebound overnight as
investors hoped that an expanded U.S. pandemic aid stimulus
would spur fuel demand and stoke economic growth.
U.S. West Texas Intermediate crude CLc1 futures were up
0.39% at $48.27 a barrel. O/R
Treasuries were little changed after trading sideways
overnight in thin trade amid the year-end holidays. U.S.
two-year yields US2YT=RR were steady at 0.127% and benchmark
10-year yields stood at 0.9364%. US/