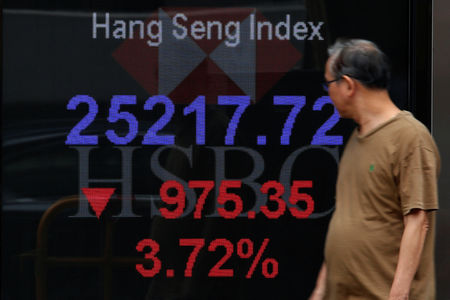 By Swati Pandey
SYDNEY, Jan 22 (Reuters) - Asian shares slipped off record
highs on Friday as investors took profits after a recent rally
that was driven by hopes of U.S. economic stimulus by newly
inaugurated President Joe Biden.
Sentiment was also hit by worries of new coronavirus
restrictions in China which reported 103 COVID-19 cases on
Friday.
Futures pointed to a bleak start for European and U.S. share
markets. Eurostoxx 50 futures STXEc1 was down 0.4% while
futures for Germany's Dax index FDXc1 slipped 0.3% and those
for London's FTSE FFIc1 fell 0.2%. E-Mini futures for the S&P
500 ESc1 stumbled 0.25%.
MSCI's broadest index of Asia Pacific stocks outside of
Japan .MIAPJ0000PUS extended losses in afternoon trading to be
last off 0.6% at 720.17 points following three straight sessions
of gains.
The index is up a stellar 8.8% in January so far, after
hitting an all-time high of 727.31 on Thursday.
Analysts expect Friday's losses to be short-lived as they
predict a strong upswing in global growth supported by record
low interest rates the world over.
"2021 begins with expectations of reopening in second-half,
as the key macro theme and consensus forecasts project a
V-shaped recovery in global growth and corporate earnings," Paul
O'Connor who heads the UK-based multi-asset team at Janus
Henderson.
"Although many countries and sectors will bear the scars of
the COVID-19 shock for years to come, 2021 is expected to see
some decisive steps down the road to recovery as restrictions on
economic activity ease as the year progresses, unlocking pent-up
consumer spending," O'Connor added.
The MSCI Asia ex-Japan index has jumped 3.7% so far this
week, reflecting relief over an orderly transition of power in
the United States and strong expectations that U.S. stimulus
will provide continued support for global assets.
Republicans in the U.S. Congress have indicated they are
willing to work with President Joe Biden on his administration's
top priority, a $1.9 trillion U.S. fiscal stimulus plan, though
some are opposed to the price tag. Democrats took control of the U.S. Senate on Wednesday,
though they will still need Republican support to pass the
program. Australia's benchmark index .AXJO eased 0.3% while Japan's
Nikkei .N225 fell 0.4%.
Chinese shares started on the backfoot with the blue-chip
CSI300 index .CSI300 down 0.3% and Hong Kong's Hang Seng
.HSI was off 1.4%.
Travel plans were in limbo for tens of millions of people in
China's northern cities who have been under some kind of
lockdown amid worries that undetected coronavirus infections
could spread quickly during the Lunar New Year holiday, which is
just weeks away.
Overnight on Wall Street, both the S&P 500 .SPX and Nasdaq
Composite .IXIC closed at record highs. .N
In currency markets, the U.S. dollar =USD paused after
three straight days of losses, though it is still down 0.7% so
far this week.
Against the Japanese yen, the dollar has slipped 0.28% so
far this week. JPY=
The commodity-sensitive Australian dollar AUD=D3 is up
0.6% this week while the euro EUR= has climbed 0.8% in the
period.
The greenback's recent slide has been led by investors
ploughing money into higher-yielding currencies on optimism
about a rapid economic recovery led by massive U.S. stimulus.
Popular cyptocurrency bitcoin BTC= fell to an almost
three-week low on Friday on profit-taking and worries about
extra regulations. It is on track for its worst weekly performance since early
2020, down 12.3% so far.
In commodities, oil prices were weighed down by worries that
new pandemic restrictions in China will curb fuel demand in the
world's biggest oil importer. O/R
Brent LCOc1 and U.S. crude CLc1 were each 73 cents lower
at $55.37 and $52.40 per barrel respectively.
Spot gold XAU= was down 0.6% at 1,859.4 an ounce.