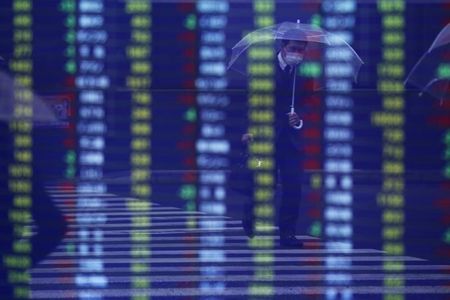 By Swati Pandey
SYDNEY, Dec 16 (Reuters) - Asian stocks were buoyant on
Wednesday and the dollar eased as hopes of effective coronavirus
vaccines and the growing prospect of more U.S. fiscal stimulus
cheered investors ahead of the Christmas holiday season.
In a sign the positive momentum was set to extend, Eurostoxx
50 futures STXEc1 and Germany's Dax futures FDXc1 edged 0.1%
higher, while futures for London's FTSE FFIc1 firmed 0.3%.
MSCI's broadest index of Asia Pacific shares outside of
Japan .MIAPJ0000PUS rose 0.8% after two straight days of
losses.
The index, hovering near record highs, is up 3.8% so far in
December and is on track for its best yearly performance since
2017 thanks to generous government and central bank stimulus
around the world.
Australian shares .AXJO rose 0.8% while South Korea's
KOSPI .KS11 was up 0.4% and Japan's Nikkei .N225 added 0.2%.
China's blue-chip CSI 300 index .CSI300 added 0.15% and
Hong Kong's Hang Seng index .HSI climbed 0.86%.
"We expect many emerging market economies to continue to
show positive momentum in 2021 led by Asia," TD Securities wrote
in a note, adding that, on aggregate, they would recover lost
output from 2020.
"China is likely to see a more rapid convergence to
pre-COVID GDP levels."
E-mini futures for the S&P 500 ESc1 were off 0.05%.
Overnight, U.S. and European stocks, gold and oil were
upbeat. The Dow .DJI rose 1.1% while the S&P 500 .SPX and
the Nasdaq .IXIC climbed 1.3% each. .N
Optimism over a $1.4 trillion U.S. spending package
increased after House of Representatives Speaker Nancy Pelosi
invited other top congressional leaders to meet late on Tuesday
to hammer out a deal to be enacted this week.
Progress on the roll-out of vaccines continued after Moderna
Inc's COVID-19 vaccine appeared set for regulatory authorization
this week.
The U.S. also expanded its rollout of the newly approved
vaccine developed by Pfizer Inc. PFE.N and BioNTech SE
BNTX.O . "Despite COVID still raging in Europe and the United States,
markets are looking through the near-term risks to economic
growth and focusing on the likely better times in 2021,"
Betashares chief economist David Bassanese wrote in a note.
"Central banks are promising to keep rates low for 1 to 2
years, which is supporting the economy and financial markets and
also provides a ramp for equity price," he added.
Markets will now look to the U.S. Federal Reserve for new
projections on whether the economy will suffer a double-dip
recession or is on the cusp of a vaccine-inspired boom.
The central bank is to release a statement later in the day,
with analysts expecting some guidance on when and how the Fed
might change its bond purchases. Optimism for a trade deal on Brexit also boosted stocks,
while contributing to a weaker dollar against the British pound
and the euro.
The dollar JPY= made a fresh 1-1/2 month low of 103.40
against the Japanese yen as progress toward a spending bill and
COVID-19 relief measures sapped demand for safe assets. It is
down 4.7% this year so far.
Against the euro EUR= , the greenback languished near 2
1/2-year lows and was last at $1.2160 after two straight days of
losses while it was flat at $1.3459 on sterling GBP= .
In commodities, gold prices XAU= rose 0.1% to $1,855.17 an
ounce. GOL/
Gold, regarded as a hedge against inflation and currency
debasement, has risen over 22% so far this year amid
unprecedented government stimulus globally.
Brent crude LCOc1 slipped 8 cents to $50.68 a barrel and
U.S. crude CLc1 fell 6 cents each to $47.56. O/R