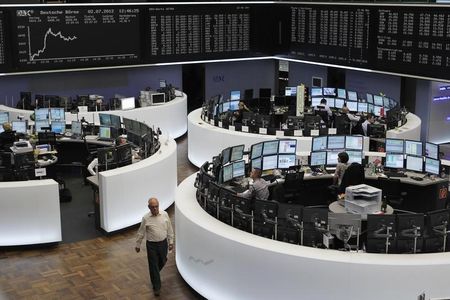 (For a live blog on European stocks, type LIVE/ in an Eikon
news window)
April 29 (Reuters) - European shares slipped on Wednesday as
a slide in healthcare stocks outweighed upbeat earnings outlook
from German automakers and sensor specialist AMS as well as a
bounce in oil prices.
The pan-European STOXX 600 .STOXX was down 0.12% by 0723
GMT and blue-chips .STOXX50 dropped 0.4% as shares in
drugmakers Roche ROG.S and Novartis NOVN.S dragged.
Shares in BP BP.L , Total TOTF.PA and Royal Dutch Sell
RDSA.AS gained between 1.7% and 2.6% as crude prices rose on
the back of lower-than-expected rise in U.S. stockpiles. O/R
Sensor specialist AMS AMS.S jumped 10.8% to the top of
STOXX 600 as it expects the impact from the coronavirus in the
second quarter to be limited. Automakers .SXAP took heart after Daimler DAIGn.DE
forecast operating profit at its Mercedes-Benz Cars & Vans
division to be above the prior-year level and Volkswagen
VOWG_p.DE said it expected to be profitable on a full-year
basis. However, profit expectations for the second and third
quarters continued to deteriorate sharply, with Refinitiv data
pointing to a 40.4% decline in earnings for companies listed on
the STOXX 600, versus 37% a week ago.