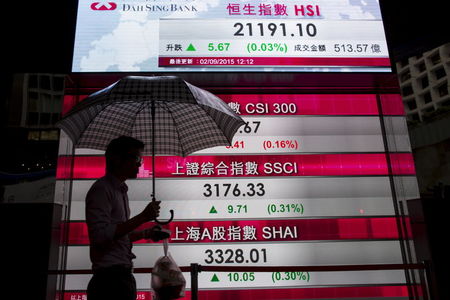 By Shriya Ramakrishnan
June 25 (Reuters) - Asian stock markets sold off heavily on
Thursday as fears of surging global coronavirus cases and fresh
trade tensions dented confidence, while the Philippine peso
retreated after a shock half point cut in interest rates.
The move by Bangko Sentral Pilipinas (BSP) was its fourth
this year, reducing headline rates to a new low and adding that
further cuts "would mitigate" risks to economic growth.
The peso PHP= , which gained as much as 0.2% earlier in the
day, fell back to trade flat at 50.05 per dollar after the
decision, while Philippine shares ended down 1.1% at a more than
three-week low.
"The surprise rate cut by the BSP will likely sap some
appreciation pressure for the peso in the near term," said
Nicholas Mapa, senior economist for the Philippines at ING,
while arguing it could be the last move this year.
The peso has appreciated 1.2% against the dollar so far in
2020 and even after four cuts in rates this year, with base
rates at 2.25%, the country's government bonds offer an
attractive premium to other emerging markets in the region.
The yield on the 10-year Philippines' debt PH10YT=RR stood
at around 3.42% after the decision, down 207 basis points from a
late-March high of 5.49%.
Stock markets of trade-sensitive economies across the region
took a hammering in morning trade as the International Monetary
Fund cut its forecasts for economic output this year and signs
of more global trade tensions overnight unnerved markets.
Singapore .STI , Thailand .SETI and South Korea .KS11
lost between 1.0% and 2.3%, while South Korea's won KRW=KFTC
fell about 0.4%.
Investors pushed funds into the dollar and other traditional
safe havens as the trade tensions and rising coronavirus cases
in India, Indonesia, the United States and parts of Europe
cooled hopes of a quick global economy recovery.
South Korean markets were further hit by the government's
proposal to widen capital gains taxes for retail investors.
Indian shares .NSEI were set to extend declines for a
second day after the IMF slashed its growth outlook for the
country, the fourth worst hit in the world by the novel
coronavirus, according to a Reuters tally.
Financial markets in China and Taiwan were closed for
holidays.