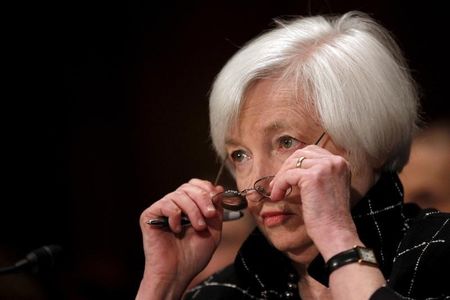 Investing.com -- Janet Yellen, Treasury Secretary designate, has her confirmation hearing in the Senate. Goldman Sachs (NYSE:GS) and Netflix (NASDAQ:NFLX) report earnings, the Covid wave looks like it has peaked in the U.S., but the International Energy Agency cuts its forecast for 2021 oil consumption again. Here’s what you need to know in financial markets on Tuesday, January 19th.

1 Yellen to tell Senate of need to "act big"

Janet Yellen, the former head of the Federal Reserve who is now Joe Biden’s nominee for Treasury Secretary, will have her confirmation hearing before the Senate Finance Committee.

Yellen’s first task will be to persuade Congress to pass Biden’s $1.9 trillion spending package to lighten the burden of the pandemic on cash-strapped households and businesses.

“Neither the president-elect, nor I, propose this relief package without an appreciation for the country’s debt burden,” Yellen said in prepared remarks published on Monday. “But right now, with interest rates at historic lows, the smartest thing we can do is act big. In the long run, I believe the benefits will far outweigh the costs, especially if we care about helping people who have been struggling for a very long time.”

There’s another salvo of bank reports, which will shed more light on the state of the economy at the start of the fourth-quarter earnings season. The first wave of updates on Friday received a cool reception, with investors taking a dim view of depressed lending volumes and margins at JPMorgan (NYSE:JPM), Citigroup (NYSE:C) and Wells Fargo (NYSE:WFC).

Today’s reports come from both Wall Street and Main Street, with Goldman Sachs needing to justify its recent all-time highs and Bank of America, State Street and Zions all under the microscope. Figures from Charles Schwab will meanwhile give a glimpse into the state of a brokerage industry struggling to monetize massive volatility-driven turnover under pressure from disruptors such as Robinhood.

U.S. stocks are set to reopen higher after the Martin Luther King Day holiday on Monday, with Yellen’s remarks a welcome reminder of the momentum behind economic stimulus measures.

All three had fallen on Friday in response to the bank earnings and a weak retail sales report. Strong Chinese export figures since then have given some reassurance as to the strength of U.S. household spending.

Earnings are also due from Carnival, Halliburton and JB Hunt. Topping the bill after the close will be Netflix.

The surge in Covid-19 at the end of 2020 appears to be receding. Hospital admissions tied to the virus fell for the sixth straight day in the U.S. to their lowest since the start of the year, although some distortions due to holiday-induced late reporting are possible.

The seven-day average for daily fatalities in the U.S. has also flattened, failing to post any new high for a week. Even so, the average daily death toll is still over 3,000.

In Europe’s largest economy, Germany, federal and state government officials are set to approve an extension of the current lockdown measures through February 15th, according to Der Spiegel.

The International Energy Agency cut its forecast for global oil demand this year, reflecting weaker-than-expected consumption in the early part of 2021 due to the pandemic.

The Paris-based think-tank said global demand will rise by 5.45 million barrels a day this year to an average of 96.64 million b/d. That’s about 300,000 b/d less than it predicted in December. That’s because it now expects Q1 consumption to be 600,000 b/d below its former estimate.