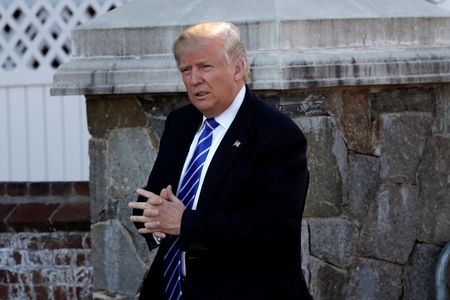 The unemployment rate in May fell to 13.3%, the Labor Department reported on Friday, confounding expectations as hiring rebounded. Economists had predicted the unemployment rate would rise to as much as 20% after reaching 14.7% in April. It is still the highest since the post World War II period, but it sent stocks soaring in early U.S. trading. The Dow Jones Industrial Average rose more than 700 points.

"We're going to be back and we're opening our country," he said, adding that he's not sure why some states have lagged behind others in loosening Covid-19 restrictions.

"We're going to be back higher," he said. "The only thing that can stop us is bad policy."

“These improvements in the labor market reflected a limited resumption of economic activity that had been curtailed in March and April,” the Labor Department said in a news release.

Trump took to Twitter to celebrate on Friday. "It's a stupendous number," he wrote. "It's joyous."

He fired off nine tweets in short order, taking a victory lap for the numbers.

Employment jumped in the sectors that were hardest-hit by the business shutdowns. Leisure and hospitality jobs jumped 1.2 million in May, nearly half the total gain for the month, after jobs in the sector contracted 7.5 million in April. It is not known how much the Paycheck Protection Program, a government assistance program for small businesses meant to encourage employers to keep workers on their payrolls, contributed to the jump in hiring numbers last month.