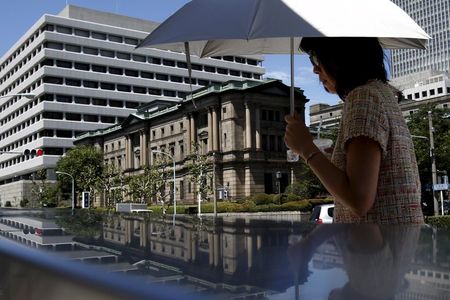 (Bloomberg) -- A majority of economists expect the Bank of Japan to leave its main policy tools untouched next week as it pauses to assess the steps already taken to shield the economy from the coronavirus.

Some 72% of 47 economists expect the BOJ to keep policy unchanged at a two-day meeting ending June 16, according to a Bloomberg survey. While no major move is expected, half the analysts predict the central bank will enhance its loan support for companies in some form.

Since March, the bank has pledged unlimited purchases of government bonds, expanded its exchange-traded-fund buying and launched loan programs as part of measures worth almost $700 billion.

The survey suggests the BOJ can now take a breather. Some 71% of the analysts said the bank has done enough or more than enough to cushion the economy. Some 95% said the pandemic is unlikely or very unlikely to push Japan into a financial crisis.

Among analysts expecting an expansion of the central bank’s loan support, many of them cited the planned enlargement of government lending linked to the BOJ’s program as a factor.

Governor Haruhiko Kuroda and his BOJ colleagues meet next week as risk appetite returns to financial markets. The yen has weakened and the Nikkei 225 Stock Average has recovered to pre-virus levels amid gradual steps in Japan and other major economies to reopen from shutdowns.

“The BOJ will probably take no easing action this time,” said economist Shinichiro Kobayashi at Mitsubishi UFJ (NYSE:MUFG) Research & Consulting. “The BOJ has introduced a number of tools quickly and they’ll use this meeting to examine their impact.”

The Japanese government and the BOJ last month issued a rare joint statement pledging cooperation to protect the economy from the virus’s fallout. Prime Minister Shinzo Abe has introduced about $2 trillion in stimulus measures and Kuroda has stressed that the BOJ will actively buy government bonds to keep yields down.

Some 54% of the BOJ watchers say the bank is essentially monetizing the country’s debt, the survey showed. Another 42% said that through the joint statement the bank had taken a step toward the outright funding of government operations.