(Bloomberg) -- U.S. Trade Representative Robert Lighthizer said he feels “very good” about the progress of the phase one trade agreement with China, which he said is honoring the pact amid the coronavirus pandemic.

“On the structural changes, China has done a pretty good job,” Lighthizer said Thursday during a virtual event held by the Economic Club of New York. “And we’ve seen significant purchases over the course of the last many weeks.”

On Monday and Tuesday of this week, China bought $185 million worth of U.S. soybeans, he said, refuting a report that Beijing wasn’t living up to its commitments on the commodity purchases.

His comments come as tensions between the U.S. and China have escalated in recent weeks, throwing into question the stability of the initial trade agreement. President Donald Trump has blamed the Asian nation for misleading the world about the scale and risk of the coronavirus outbreak and Beijing’s crackdown on Hong Kong has further deteriorated relations.

The pandemic shows why the U.S. should have an industrial policy, Lighthizer said, to ensure that America can manufacture domestically the supplies it needs including medical equipment and protective gear.

He said the coronavirus crisis will change the trade relationship between the U.S. and China, India and other countries, as the Trump administration is seeking to reshore supply chains, particularly in the medical space.

“After the crisis is over we have to have an industrial policy that assures the United States has in any future crisis the ability to manufacture at home all the things that we need,” he said. “We need a policy, be it subsidies, or tariffs, or whatever it takes. We have to have an industrial policy so we never find ourselves in this position again.”

Separately, he said he’s not in favor of the U.S. pulling out of the World Trade Organization, which has become a court for disputes instead of a venue for negotiations. The WTO has also become a lightning rod of criticism for the Trump administration, which argues that China has not fulfilled its 2001 commitments to embrace a more market-oriented economy.

U.S. trade in goods and services plunged in April to the lowest level in almost a decade as the Covid-19 pandemic stifled demand and hindered logistics. Foreign trade was already easing prior to the virus outbreak and has worsened as businesses shuttered around the world to stem the spread and supply-chains were disrupted.

Even so, Lighthizer remained optimistic.

“One thing I can promise,” he said. “Trade will come back.” 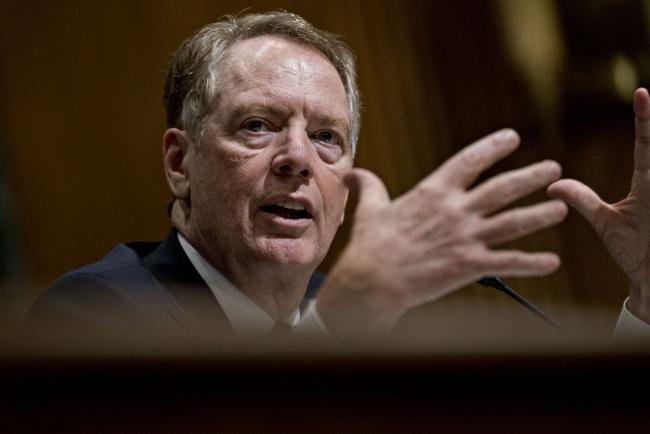