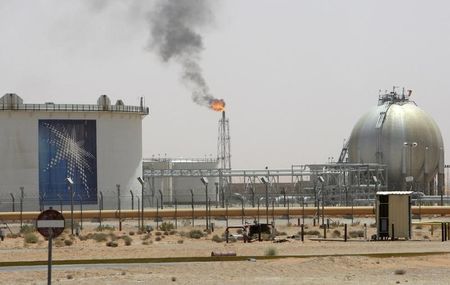 Investing.com - Oil prices will react when markets open after an attack on a key Saudi production facility, amid uncertainty over how much global supply will be disrupted. Investors are also bracing for another interest rate cut from the Federal Reserve this week, as well as a flurry of rate decisions from other world central banks.

Here’s what you need to know to start your week.

Saturday's attacks on key Saudi Arabia processing plants will test the world's ability to handle a supply crisis as it faces the temporary loss of more than 5% of global supply from the world's biggest crude exporter.

The U.S. has blamed Iran for the attack, which will cut Saudi production by about 5.7 million barrels per day (bpd), more than half of the kingdom's output, according to a statement from state-run Saudi Aramco.

Crude prices could spike by several dollars per barrel when markets open Sunday night as a prolonged outage could prompt the U.S. and other countries to release crude from their strategic petroleum reserves to boost commercial stocks globally.

"Oil prices will jump on this attack, and if the disruption to Saudi production is prolonged, an SPR release ... seems likely and sensible," said Jason Bordoff, founding director of the Center on Global Energy Policy at Columbia University in New York.

The Fed is widely expected to lower interest rates again at the conclusion of its two day policy meeting on Wednesday, in order to offset risks to the U.S. economy from trade tensions between Beijing and Washington, Brexit and a broad global slowdown.

Investors are pricing in a 78.5% chance of a quarter-point rate cut, according to Investing.com. The Fed cut rates for the first time in over a decade in July.

“We think the Fed will come down in favor of cutting rates 25bp again in what will be described as an insurance move against the headwinds facing the economy”, analysts at ING wrote in a note. “Moreover, a Fed rate cut will help to mitigate upward pressure on the U.S. dollar given policy loosening seen from the likes of the ECB.”

Thursday brings policy meetings in Japan, the U.K., Norway and Switzerland in the wake of Wednesday’s Fed decision and last week’s stimulus package from the European Central Bank.

The Bank of Japan is expected to keep interest rates unchanged unless the Fed decision jolts markets and triggers a spike in the yen.

Switzerland, with a -0.75% interest rate, is quiet so far on the prospect of emulating ECB easing but will be concerned at the franc's surge to two-year highs versus the euro.

The Bank of England is not expected to make any changes, but its rate statement will be closely watched for any concerns over the economic fallout from Brexit.

The central bank of Norway could hike again, but with easing gathering steam all around, it is very likely to mark the end of its tightening cycle.

Junior U.S. and Chinese officials meet in the coming week ahead of planned talks between senior trade negotiators in early October and investors will be on the lookout for any indications that relations between the two sides are thawing.

Economic data from China on Monday, including reports on industrial production, retail sales and fixed asset investment will provide some insight into how the world’s second largest economy is bearing up amid the protracted trade war.

The economic calendar will bring an update on the health of the U.S. housing market, with reports on housing starts and existing home sales. Global shipping giant FedEx (NYSE:FDX), considered a bellwether for the U.S. economy, is due to report earnings on Tuesday.

In the Eurozone, a report on Germany’s ZEW index on Tuesday will offer more insight on whether the bloc’s largest economy is on track for a recession after contracting slightly in the second quarter.

The U.K. is to release data on CPI, while Canada is to report on CPI and retail sales.

-- Reuters contributed to this report