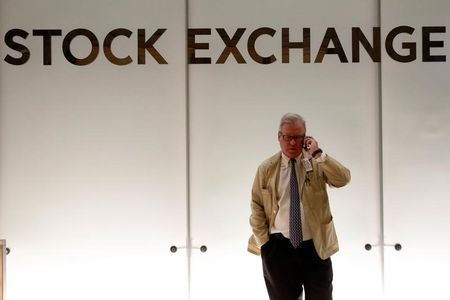 Investing.com - The rush to develop treatments for Covid-19 is heating up, prompting investors to diversify bets in the healthcare sector and trade tensions between the U.S. and China are firmly back on the agenda. On the economic calendar, the weekly jobless claims report continues to be the main number to watch, given its timeliness. Federal Reserve Chairman Jerome Powell is to discuss the U.S. economy in an appearance on Friday and the Fed publishes its Beige Book on Wednesday. Meanwhile, the European Commission is to unveil its pandemic response plan and retail earnings are winding up. Here’s what you need to know to start your holiday shortened week.

Governments and investors are focusing their hopes on a vaccine as it’s unlikely economic activity can resume fully without one.

So the race is on and it has already driven up prices for some pharmaceutical stocks. Hopes for a treatment have sparked outsize rallies in the shares of companies such as Moderna (NASDAQ:MRNA) and Inovio Pharmaceuticals (NASDAQ:INO).

AstraZeneca (NYSE:AZN) has vaulted into the position of the most valuable British company after receiving a U.S. pledge for up to $1.2 billion for its experimental vaccine.

The U.S. also has vaccine development deals with Johnson & Johnson (NYSE:JNJ) and Sanofi (PA:SASY). But many others companies, both large and small, are in the race: Imperial College, Gilead Sciences (NASDAQ:GILD), Roche, China’s CanSino Biologics and India’s Glenmark to name just a few.

With the global economy in an unprecedented downturn, fears over the prospect of a renewed trade conflict between the worlds two largest economies are difficult to discount.

In the past week, U.S. President Donald Trump has ramped up his rhetoric against Beijing over its handling of the pandemic, the Senate passed a bill that could result in barring some Chinese companies from listing shares on U.S. stock exchanges and a retirement-savings plan for federal workers delayed plans to invest in some Chinese companies.

China’s proposal for a tougher national security regime in Hong Kong looks set to open a new venue for Sino-U.S. tension, with the U.S. already warning of a tough response.

After Monday’s Memorial Day public holiday, the U.S. calendar is set for a busy week. Thursday’s weekly jobless claims report continues to be the highlight and will indicate whether there is any let up in layoffs as states continue efforts to reopen their economies.

Fed Chair Powell will appear in a webcast discussion on Friday to discuss the state of the economy and the central bank's efforts to stabilize it. The Fed publishes its Beige Book on Wednesday and revised figures on U.S. first quarter growth out earlier the same day will show if the economy suffered a bigger hit than initially reported. There will also be reports on consumer sentiment, durable goods and personal spending.

Clashes in the euro zone over how to handle the economic impact of the COVID-19 crisis raised fears for the bloc’s future, but a Franco-German proposal aimed at helping the worst-hit states represents a pivotal moment. The markets want to see details so all eyes will be on the European Commission this Wednesday when it presents its pandemic recovery plan.

Other events to watch this week include German Ifo data on Monday, which is expected to show that German companies remain pessimistic and what are expected to be some subdued inflation numbers for May.

European Central Bank President Lagarde and Chief Economist Philip Lane are both due to speak this week and they will likely reiterate the message that more action from governments in the form of fiscal stimulus will be needed to get the bloc’s economy back on track.

The New York Stock Exchange trading floor is set to partially reopen after the Memorial Day holiday on Tuesday, over two months after it shut down amid widespread measures to control the spread of the coronavirus.

First quarter earnings season is continuing to wind down with retailers again the main companies reporting this week. Costco (NASDAQ:COST), Dollar General (NYSE:DG), Nordstrom (NYSE:JWN), Ulta Beauty (NASDAQ:ULTA) and Burlington Stores (NYSE:BURL) are among some of the companies reporting earnings.