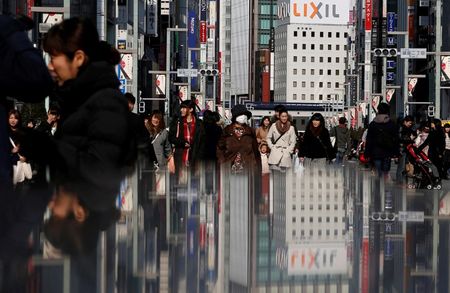 (Bloomberg) -- Staring at a record debt issuance this fiscal year, traders in Japan’s sovereign bond market are signaling that the $2 trillion deluge will flatten the nation’s yield curve.

That’s owing to two factors. First, the bulk of the increase in government debt sales is in shorter-maturities where waning foreign demand is already pressuring yields to rise, even after the Bank of Japan ramped up purchases. At the other end of the curve, rising investor demand for super-long bonds is seen driving yields lower in the sector.

While shaping their expectations based on Japan’s current fiscal and monetary policy mix, analysts are quick to point out that the BOJ’s bond purchases remain the joker in the pack.

“Local yields are now driven by the balance between fiscal policy on the supply side and central bank buying on the demand side,” said Koichi Sugisaki, a strategist at Morgan Stanley (NYSE:MS) MUFG Securities Co. in Tokyo. “The curve is biased for flattening, given the strong demand for super-long bonds.”Here is a look at what’s playing on different parts of the curve:

Depressed global yields are driving Japanese investors toward these positive-yielding securities. Local insurers, among the biggest holders of fixed-income assets, snapped up 1.53 trillion yen of super-long JGBs over April and March, the biggest two-month take up since 2013.That’s even as they are known to typically allocate funds abroad at the beginning of the fiscal year in April.

“It’s a surprise to see insurers adding super-long bonds from the start of a fiscal year,” said Takafumi Yamawaki, head of local rates and FX research at JPMorgan (NYSE:JPM) Securities Japan. “It suggests they will be more active in allocating to JGBs this year.”

The BOJ has kept its purchases of bonds maturing over 10 years largely unchanged so far in 2020. That’s a far cry from last year, when its tapered super-long purchases aggressively in a bid to steepen the yield curve.

Analysts see the 10-year yield sticking to a narrow range around zero percent under the BOJ’s yield-curve control policy. That’s even as strong collateral demand amid the introduction of a new lending program saw Japan’s biggest banks in April buy the most 10-year JGBs in about six years.Any downward pressure on yields from collateral demand owing to the BOJ’s loan program for small business wouldn’t be too strong, said Naomi Muguruma, senior market economist at Mitsubishi UFJ (NYSE:MUFG) Morgan Stanley Securities Co. in Tokyo. “It’s unrealistic to expect banks to lend explosively. It’d be a slow process.”

The BOJ’s reluctance to cut its negative rates further also indicates that the benchmark yield’s “range-bound moves will continue,” she said.

With all Japanese debt due under 10 years already carrying negative yields, the surge in issuance in this sector is particularly concerning for market watchers.

The yields on Japan’s 2- and 5-year bonds have risen in May even after the BOJ boosted its buying of bonds with maturities of one to 10 years to soften the impact of increased government borrowing.

Analysts blame the yield pickup on waning foreign demand, with overseas investors turning net sellers of medium-term JGBs in April for the first time since August, according to data from the Japan Securities Dealers Association.

That’s after the Federal Reserve beefed up its existing dollar-swap lines with major central banks including the BOJ, boosting the supply of the greenback.

“Unlike the super-long zone, medium-tenor notes lack a solid investor base, raising concern about who would buy as issuances in these sectors increase,” said Yamawaki of JPMorgan. “This puts focus on BOJ’s bond-buying operations.”