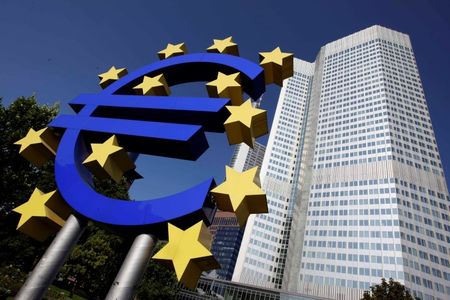 Investing.com - The euro zone economy grew at a slightly faster than expected rate in the third quarter, but remained weak overall, according to preliminary data released on Thursday.

Eurostat said GDP rose a seasonally adjusted 0.2% from July through September, matching growth of 0.2% in the prior quarter.

Economists polled by Investing.com forecast a rise of 0.1% in the third quarter.

Year-on-year, GDP growth in the single currency bloc rose 1.1% in the third quarter, compared to the 1.2% expansion seen in the previous quarter, in line with forecasts.

Separate reports showed that the consumer price index for the bloc fell to 0.7%, while the unemployment rate ticked up to 7.5%, slightly higher than the consensus for a reading of 7.4%.

The euro zone economy has weakened over the last year due to trade tensions with the U.S. and uncertainty over when the U.K. will leave the bloc, while Germany has remained on the brink of a recession. Recent business activity has pointed to the euro zone economy entering near stagnation.

Outgoing president of the European Central Bank Mario Draghi warned at his final policy meeting last week that the EU would face “protracted weakness” going into 2020.

“The main risk from all viewpoints, but especially also from a financial stability viewpoint, is a downturn in the economy … whether it is global or it is eurozone,” he said.

In September the ECB unveilled fresh stimulus measures in a bid to prevent the faltering euro zone economy from grinding to a halt. It cut its deposit rate – the interest paid to commercial lenders when they deposit funds with the central bank, deeper into negative territory and relaunched bond purchases worth 20 billion euro per month.

The euro remained higher against the broadly weaker dollar following the data, with EUR/USD up 0.2% to 1.1168.